Floating Above The Fairies #3

We almost did not make it. The shuttle bus from Butterfly Balloons has arrived while we were still in the room. Fortunately, we have already packed our bag with cameras and wind-breakers the previous night. Most of the seats were already filled by sleepy eyed passengers when we boarded the bus.

We alighted at the company office for a buffet breakfast before the ride. During the breakfast, Mustafa summoned us into his office. He was dressed in a white aviation captain finery and looked like an airplane pilot rather than that of a hot air balloon. Sitting down in his armchair, he solemnly declared that even though we have booked the ride directly with the company, we were still entitled to the 20 Euro discount given to customers referred by Aydinli. Having said that, Mustafa smiled at us. He would be our pilot for the ride. We were already imagining plucking apricots from the hot air balloon.

After filling up our stomach with food and fruits, we are eager to get our foot into a hot air balloon. Mustafa and other pilots herded the customers into the shuttle buses.

A hot air balloon ride with Butterfly is like an Apple product event. And Mustafa was Butterfly’s Steve Jobs. After all have boarded the bus, Mustafa immediately announced that he was still having a hangover from last night. He just completed his pilot training last week. Sounds of laughter filled the bus. Sensing that he had everyone attention, he went through safety precautions to be observed during the ride. 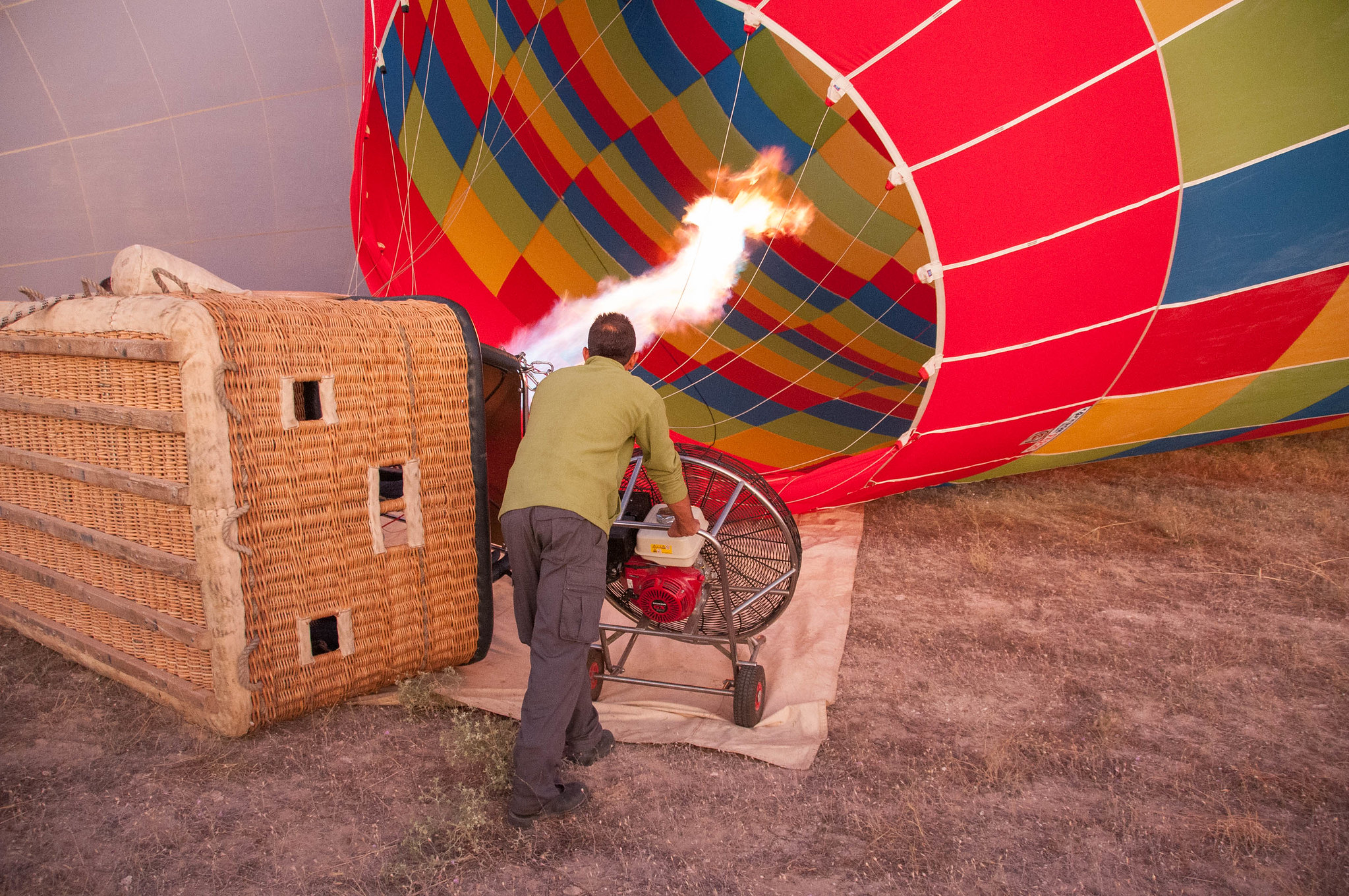 We alighted on a big flat grass plain. Witnessing the preparations were an integral part of the ride. Several hot air balloons were arranged side by side. The ground crew were fanatically getting the balloons ready for flight. Many passengers were taking photos of the busy bee actions on the ground. The preparations evolved around pumping air into the balloon and then heating the air within. The hot air balloon was then pushed upright. The time has finally arrived for our adventure.

The wicker basket did not have a door so we took turns to climb into the wicker basket. The basket was divided into eight compartments which could comfortably house 16 people for one ride. The passengers on our ride came from many countries. We spotted an Italian couple, a Chinese couple who were colleagues touring in Turkey after a business conference, and other Asians presumably from Korea and Japan. 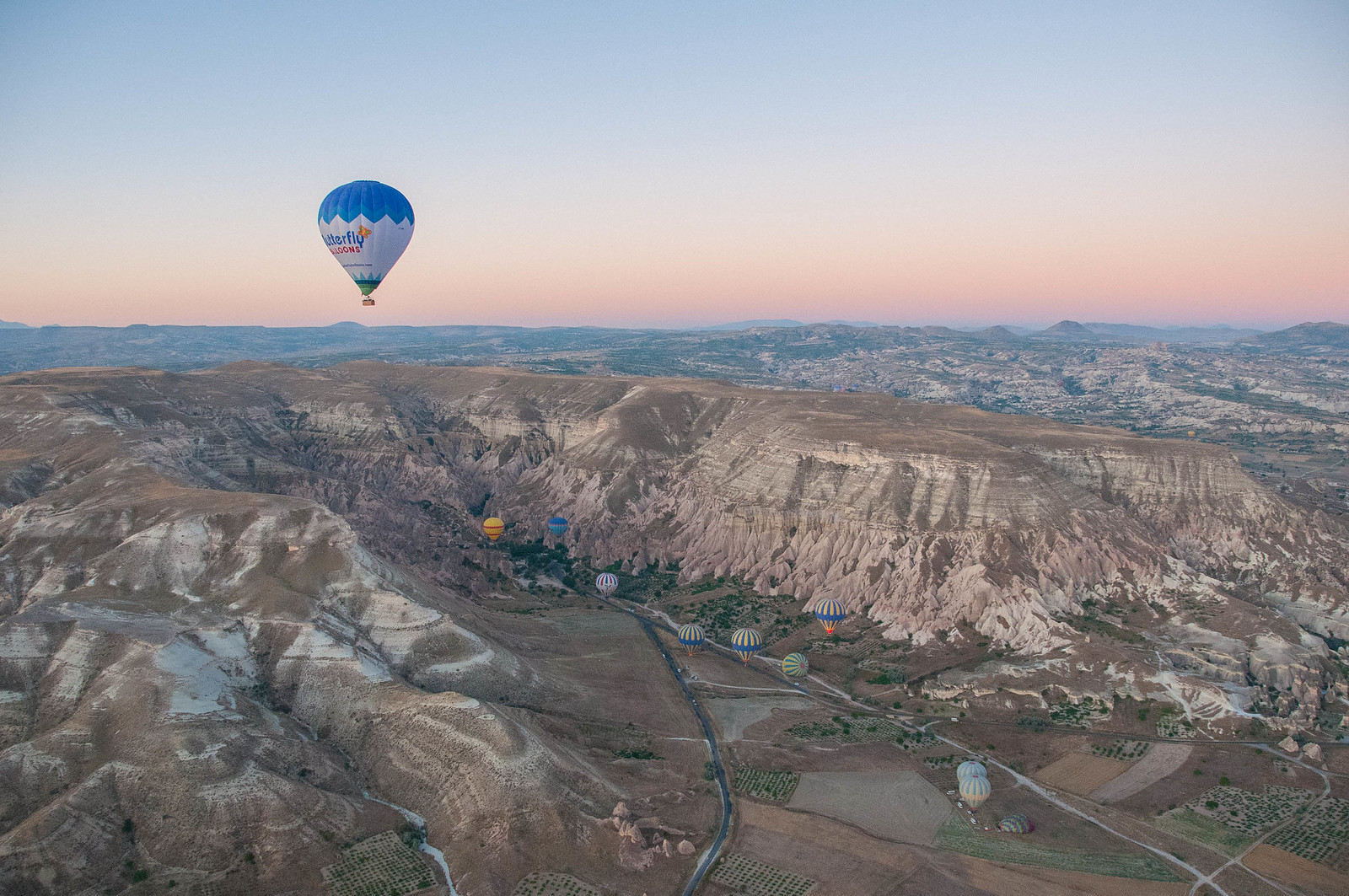 The hot air balloon begun its gradual ascent with the cool morning breeze. There was not much time for our nervousness to linger. The cool air caressed our face and erased any last tinge of uneasiness. The sun has risen, pulsing gentle rays of lights into the sky and the landscape beneath. The distant sky exploded into a kaleidoscope of orange, yellow, red and pink. Not to lose out, the earth subtly revealed its beauty to us with the soft sunlight. It was a great moment to marvel at the power of Mother Nature. Numerous gullies scarred the hills, revealing the river pathways gone many years ago. The fairy chimneys resembled stone stalagmites sprouting from the ground with a life of their own. 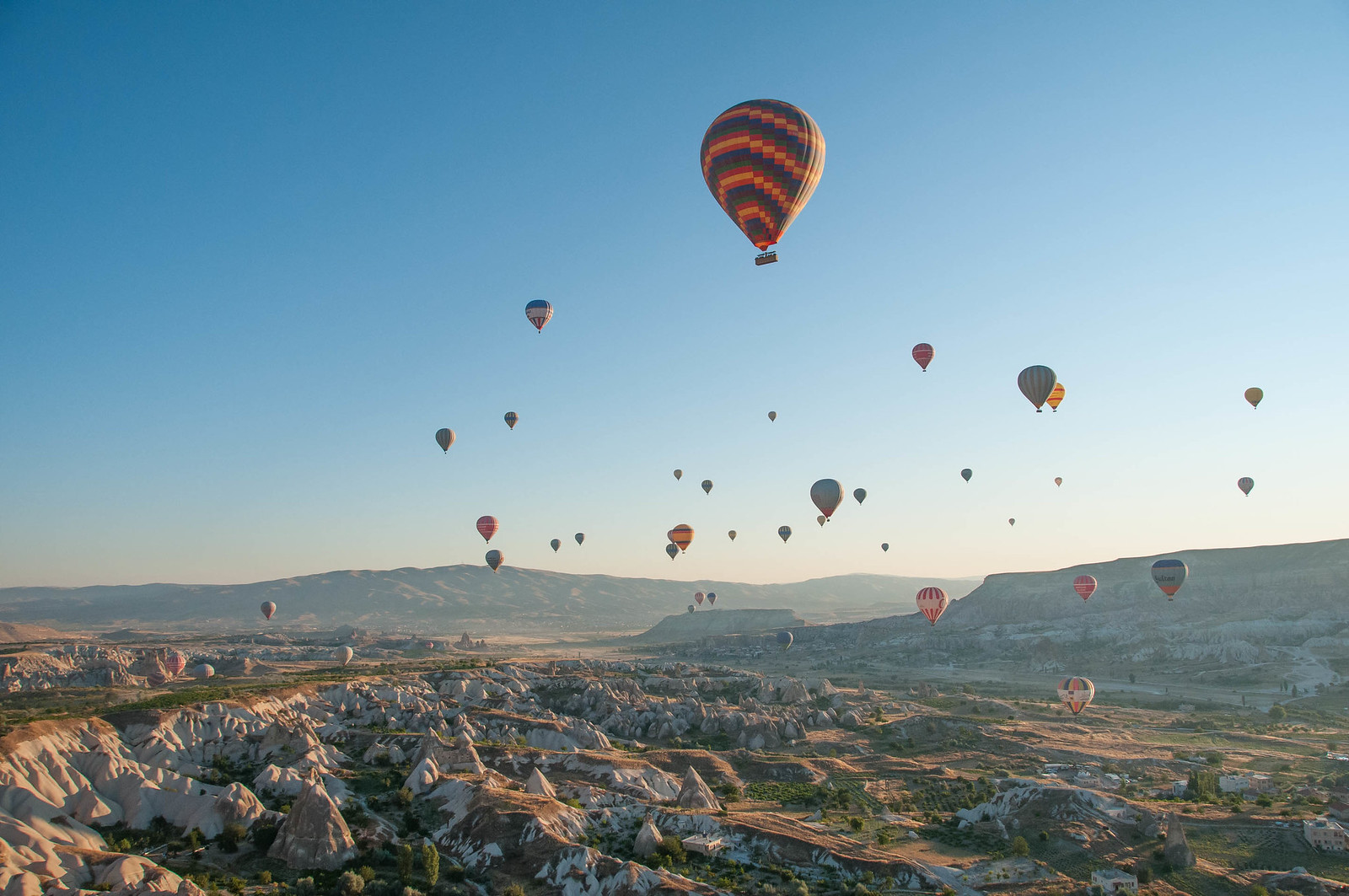 Being so high up in the sky on a hot air balloon also played tricks on scale and time. Time slowed down. Hot air balloons which looked so huge on the ground now seemed like the small rubber balloons we played with as a kid. It felt as if you could just stretch your hand to grab the imaginary string and swing them around. When we looked down, the earth looked like a gigantic Google Map. 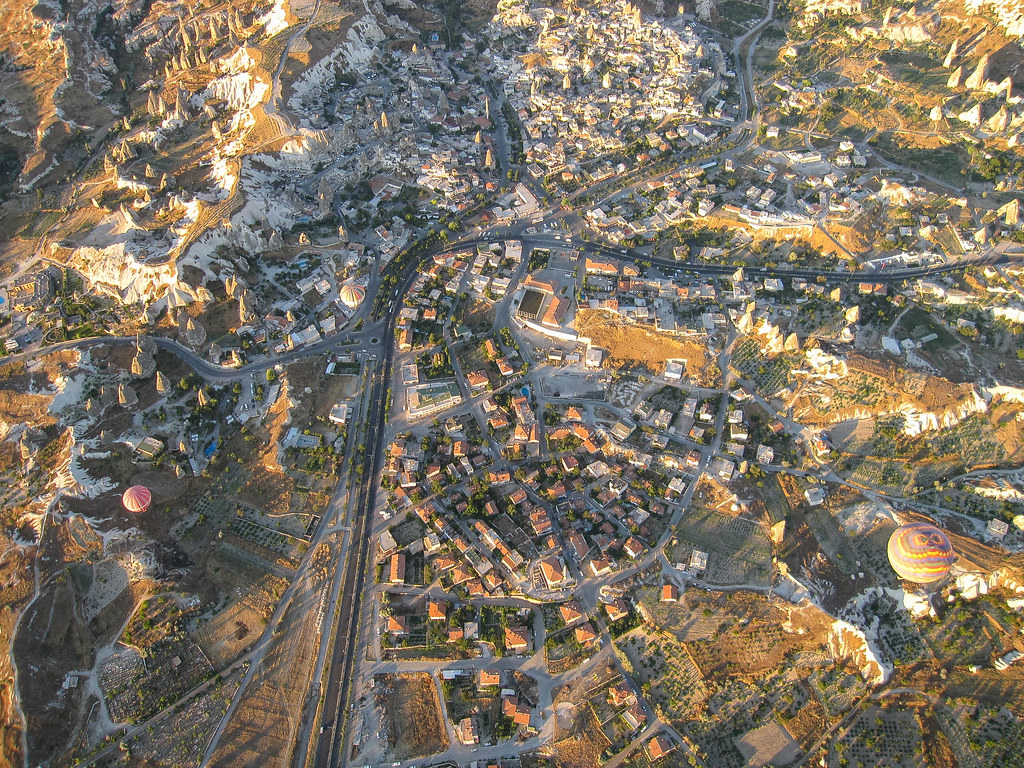 All this while, Mustafa was calmly operating the balloon and providing commentaries to anyone who bothered to listen. He occasionally reported his location and speed over the radio to the ground staff. He even sneaked in a few jibes at his competitors. Pointing out several balloons which were much higher than ours, he explained that those pilots were inexperienced in navigating their balloons. Hence the balloons could only move vertically. 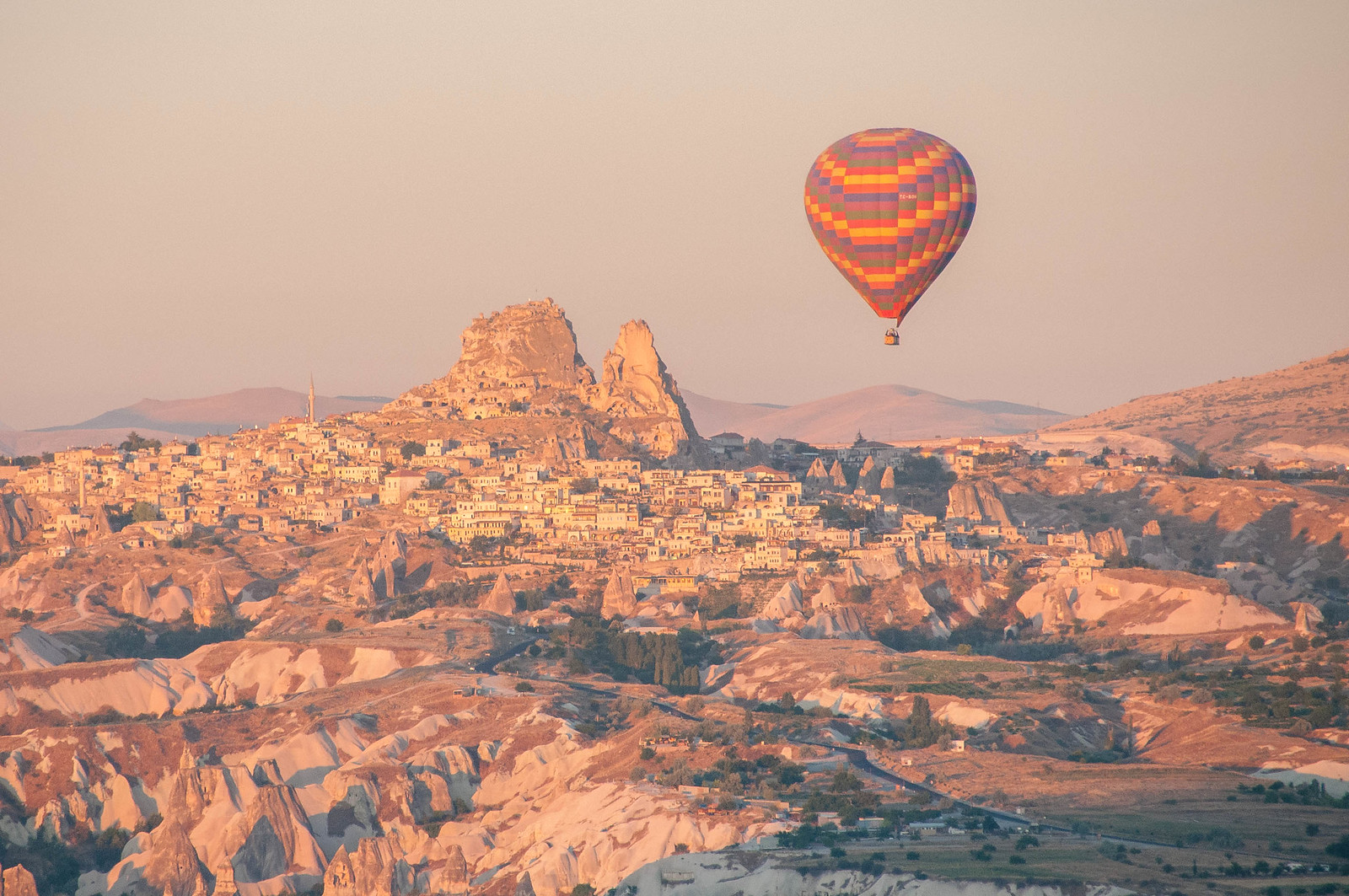 Midway through the ride, Mustafa rotated the balloon so that all could get a change of view. A while later, Mustafa steered the balloon into one of the valleys. Instead of soaring above the fairy chimneys, we suddenly found ourselves among them. We were so close that we could touch them! Sadly, the balloon was not low enough for us to pluck some apricots from the trees. We could see balloons resting on the ground afar. This certainly meant that our adventure would be coming to an end. Mustafa still had some tricks up his sleeves.

Mustafa announced that he would need a volunteer to fly the hot air ballon out of the valley. My wife eagerly raised her hand. Mustafa taught her how to steer the balloon. She intimated Mustafa’s actions but could only get the balloon to ascend slightly. Finally, with Mustafa’s encouragement, she pulled the rope handle hard, lifting the balloon out of the valley. Mustafa took over the balloon and begun its descent onto the ground. My wife’s career as a hot air balloon pilot was over in a matter of minutes.

The ground crew were already waiting at the landing ground. No doubt alerted by Mustafa through the radio. Another passenger got a chance to land the hot air balloon onto the ground. While we climbed out of the wicker basket, the ground crew swiftly set up the refreshment table. Mustafa handed out trip certificates, poured champagne, and congratulated everyone on the trip. 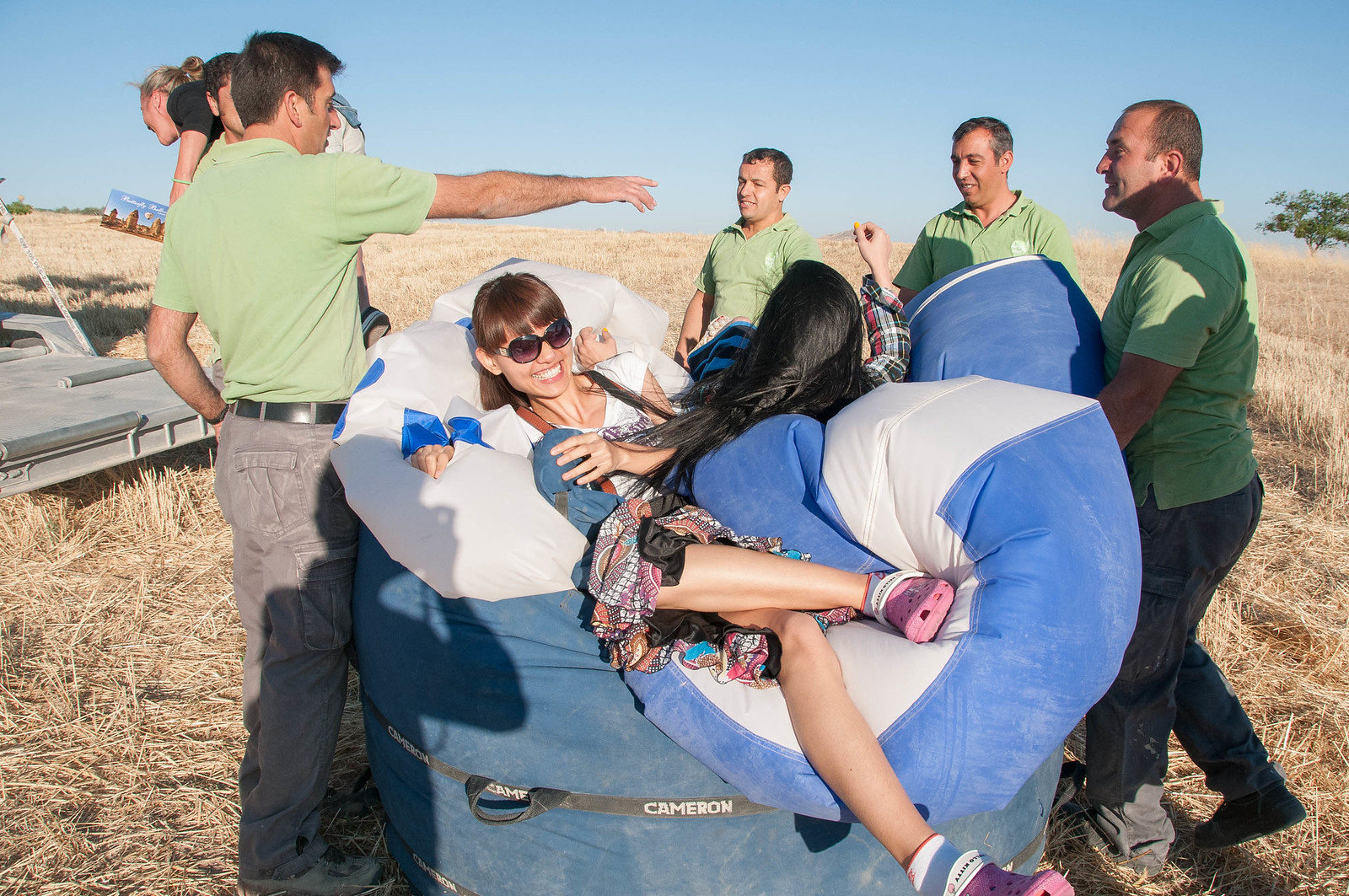 The same shuttle bus brought us back to Aydinli. We left Aydinli before dawn with sleepy eyes and uncertain about the ride. We now returned with twinkles in our eyes, lightsomeness in our footsteps and memories to last a lifetime. Next, we would be going to the old city of Istanbul. But that would be a story for another day. 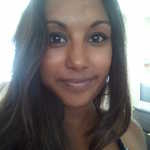 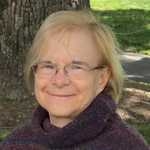 Shu, Christine, Ranmali, Paul and 3 others said thanks.

Other moments in Göreme