1925: The Ur-Leica And The Golden Age of Photojournalism

The Evolution of the Photographic Posture: Part Three

At the beginning of the 20th century a concurrent string in photography was ignited through the motion picture industry. German Oscar Barnack was searching for a solution for proofing the lightning of film sets prior its final shooting. Back in those days, without the possibility of an instant checkup on monitors, photographers and filmmakers had to calculate and guess if the light set up would work out fine on the film material. The material was also quite expensive and it took hours to develop the film rolls. As a consequence creatives tried their best to do it all right with the very first shot they had.

However, Barnaks plan was to take still photographs of the set the day before filming, develop the material as fast as possible, hurry back to the film set and make light and set adjustments according to outcomes. Therefore he needed to use the same 35mm movie film material in a still camera to have comparable results. Since there was no such a camera he started to built his own one which would be able to handle that same specific material as used in the movie industry. His camera prototype was ready in 1914, but because of WWI it took ten more years to have German Ernst Leitz junior to start the serial production of the so called first Leica based on Barnak’s prototype. The Leica was presented to the public in 1925 and was an unexpected success. Lightweight, handy, offering now 36 photographs in a single film canister as well as exchangeable high-class optics may have been the best arguments for Leica’s triumph.

“Ur Leica” by Leica - Leica Microsystems. Licensed under CC BY-SA 2.0 de via Commons.

Together with higher film sensitivity and the on and on improving print quality of newspapers it was the advent of the “Golden Age of Photojournalism”. Newly founded magazines reporting from war zones like the Time or Life were thirsty for any good photograph to show — and remember, the world was not photographically covered yet. It also led to the independent and international photographic cooperative Magnum Photos, which is entirely owned by its members. The founders of Magnum Photos Robert Capa, Henri Cartier-Bresson, David „Chim“ Seymour and George Rodger postulated to retain all copyright of their own work. They also insisted on stating the photographers name next to the picture that was going to be published by any print matter. For the last 60 years those claims became a respected standard in the Western World. Nowadays, with social media sharing platforms and other ways of easy file exchange those claims are often less and less respected even by big newspapers — speaking particularly about their internet presences. Because of this new situation creatives have to rethink their business models of making a living with visual work and find new strategies of protecting their copyrights if needed so. On the other hand the question remains, How to be seen and known out there in the culture of web 2.0 where free sharing of content is an expected standard? …

In the beginning and middle of the 20th century cameras had become so small that to see through the small viewfinder the photographers arms had to be strongly angled to bring the camera close to the photographers eye. Resting the weight of the camera in one hand, fingers from both hands were waiting on multiple buttons and wheels to change settings quickly. Because of the difficulty to hold the camera steady the photographer needed to step one food forward and bring both legs a step apart while pushing his or her elbows as close as possible to the upper body. The photographer might have even used his or her surrounding like walls, tables, cars, or even laid down on ground floor for a stable poise and therefore sharp photograph — or just used the good old tripod or flash again. As a consequence he or she was free to bring the camera into completely new positions for the sake of new interesting perspectives like low- or high-angle shots.

The so called range finder cameras from Leica, Contax, Olympus, Canon, Ricoh, Nikon, Yashica, Pentax etc. were common from the 1930s till 1970s, but lost ground since the 1980s to Single-Lens Reflex (SLR)-cameras produced by the very same manufactures. The speciality of SLR-cameras was that they showed the actual optical view through the attached lens. Other viewfinder systems like rangefinder cameras or twin-lens-reflex cameras would not show the final view on the photograph. You wouldn’t see for example the exact focus on close up shots or the out-of-focus area of an image known as “bokeh” (thank you Kai for spreading the word) in your view finder. Only SLRs could offer that.

From the 1980 till today SLRs were the most advanced photographic preview systems available. But the technological evolution of photography is changing constantly and features like “live preview” as in modern digital cameras or hyprid optical/digital view finders as used in modern range finder cameras are gaining ground. Nonetheless, high-end digital SLR-cameras are still the work horses for most professional photographers today. 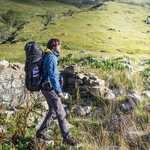