My life, distilled down to box form

“That’s my room right now.” I said, following a message with the photo above.

“It looks very sad and lonely :/” she replied.

On a Friday afternoon in the latter half of October, I was finishing-up at work and looking forward to an eventful weekend: my first ever parkour class, followed by dinner and a comedy show with my family. My phone pinged, letting me know of an incoming e-mail. I turned my attention from my work computer to my phone, and opened the e-mail:

The owners of [the address of the apartment] are returning to the area and will require the property for their own use.

Under the Residential Tenancies Act you are hereby given notice that the tenancy will terminate on 11/12/14.

Dammit… I thought. The day had finally come.

I lost count of the time I had been living in this apartment when I stopped updating a budget spreadsheet I used to track how much I was making/spending/saving. It was something I did as soon as I moved-in to this apartment just to make sure that I was living within my means. Once I was assured that I was, I stopped updating it, and upon re-opening that spreadsheet after I got that e-mail (to see how long I had lived here), I discovered I had been in this place for almost 5 years (I would hit the 5-year mark before I moved out).

5 years… It didn’t feel like a long time until I did the math. Somewhere between the end of 2009 and now, I started calling this place home, and so measuring the amount of time I had been here started to become less and less significant of an indicator of my independence, and more and more my norm.

I got used to being in the city - used to being such a short walk away from the jobs I held during that time, the friends that lived nearby as they came and went through the phases of their own lives, and all the venues at which people held parties and events. Contrast that with where I was before - in the suburbs a short train ride away with my family - and I felt that most of my rent went towards the convenience of being near most things important to me, and no longer scheduling my life around a public transport timetable.

The Sunday before my tenancy ended, my parents and I got together to start packing everything up for the movers who would be coming the following day. I corralled random papers and memorabilia sitting on tables, desks, or shelves, and I threw away things that I didn’t feel I needed to take with me or through to any other phase of my future. We filled and sorted boxes by room at first, then by random seemingly-related categories when the items from one room overflowed into other boxes (one box ending-up with 5 things written on the sticky tape label that held it closed).

I scrutinized and scrubbed-out my accumulated hoardings like a Roman emperor choosing on a whim who lived and who died with a gesture of the hand. “The bin for you!”, or “The box for you!”; only 2 possible futures for what lived in my apartment.

It took the 3 of us the whole day to pack everything in preparation for the movers, the only reward for my parents’ efforts a hot dinner on me at a nearby noodle house. I didn’t think I had that much stuff, but if I didn’t, then why did it take so long to pack? Coming back to the apartment after dinner, I counted 7 boxes excluding the furniture. If packing took so long, then how was I able to distil my life into just 7 boxes?

As I lay on my floor atop my sleeping bag (what would be my bed for the evening), surrounded by disassembled furniture, boxes, and a vacuum cleaner, I stared up at my ceiling and conveyed the details of my day through my phone. When pressed, I would go on to describe the scene as quiet. I didn’t live in the quietest part of the city (right near the motorway on/off-ramp, so would often hear trucks or biker groups or emergency vehicles as they raced to/from the suburbs), but somehow the ‘noise’ generated by my furniture felt like it was silenced in anticipation of the move the following day.

I think that was more true of me than it was my furniture.

5 years I would think again. I wasn’t unhappy that I was moving, nor was I annoyed at the landlord for coming to take his place back (he had e-mailed me to let me know the unfortunate set of circumstances that had caused him to come back). If anything, I felt content, quiet, even at peace.

I had a good run, and it was time for a change. 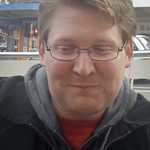 Lars and Keith said thanks.