It was 41°C with nil significant cloud. The breeze was gentle.

Hogarth: [sees the Giant, looking upset about the deer, which was shot] I know you feel bad about the deer. But it’s not your fault. Things die. It’s part of life. It’s bad to kill, but it’s not bad to die.

Hogarth: I don’t know. You’re made of metal… but you have feelings. And you think about things. And that means you have a soul, and souls don’t die.

Hogarth: Mom says it’s something inside of all good things… and that it goes on forever and ever. [Hogarth leaves. The Iron Giant lays back to look at the stars]

Liked that moment?
Subscribe to Aparna and get their extensions as they publish them. 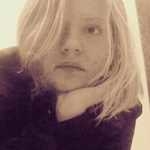 "I myself am made entirely of flaws, stitched together with good intentions." http://themindandbeyond11.blogspot.in/

Other moments in Lucknow