The fallacy of digital appearances

—My digital Self is not me.

It’s a basic of social psychology: Our non-verbals govern the way people think and feel about us. They communicate volumes and have almost more value than the words we speak. They tell the truth about ourselves (sometimes more than what we’d care to accept) and they give how we really feel during a dialogue, if we mean what we say, when we doubt, when we feel strong or insecure or nervous, and also when we bullshit, too.

Funnily enough, these non-verbals also govern the way we think and feel about ourselves. If your body poses strongly, you will feel strong. If you hold a secure position and a calmed attitude, you will feel safe and big and in control. Perhaps not instantly, but you definitely will, if you do it regularly, consciously and overtime. As they say, you really can fake it ‘till you make it. And then the magic happens when your brain forgets you had to fake it, and so you actually become it. It’s another basic of behavioural sciences and it’s pretty useful to help us deal with, among other things, common mental disorders, such as depression.

This is important because for the human brain, in an involuntary manner, there’s no real difference between feelings triggered by one space or the other. It’s a great example of self-feeding cycle: what’s real is digital is real… And just as important non-verbals are in the physical world, so they are in the digital one. It’s particularly the lack of them what matters, because it generates an eminently common scenario of implicit violence, where the nuance is lost, hidden or just non-existent.

In the digital side of life we’re blinded and mostly ignorant to these non-verbal cues that set the tone of conversations. It’s as if the price we paid to be able to communicate in real time with anybody in the world, was to accept some self-imposed level of autism in exchange. Like visiting a museum agreeing to only admire the artworks with your good eye closed.

One of the main questions I deal with everyday is: ”How can we humanize the digital space?” It may sound silly, but this is a pretty big deal, because we’re trying to bridge the gap between the digital and the physical and bring that lost subtlety back to the table.

We keep looking into the future thinking of technology, and systems, and ecosystems, and frameworks, and human interfaces and wearables and gamification and quantified selves. We talk about smart cities and smart citizens, about the internet of things, about big data and about the latest next new thing yet to come. We keep trying to imagine what the future looks like, and we keep missing the point. Over and over again. We keeping missing the point because we’re not asking the right questions. Because in the future there are no machines, and that’s the beauty of it.

Liked that moment?
Subscribe to Álvaro and get their extensions as they publish them. 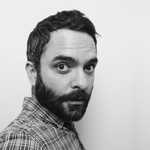 Robin, Laszlito and Lia said thanks.

Hyperspatial mind on terrestrial body. Creative Director at frog. Have brain. Will travel.

Other moments in Shanghai