Back in August 2012 I was part of a team of 4 on an exploratory expedition to the Altai mountains in Southern Siberia. The Altai are rarely visited by Westerners and our goal, funded and supported in part by the generosity of the BMC, Alpine Club, MEF, Berghaus, Buffwear and Alpkit, was to put up some British first ascents and report back on the area to facilitate future trips.

This shot was taken as we were packing up our gear at around 3am, having slept out in the open part way up the slopes of Dzhaniktu (the second highest peak in the area, just visible to the top left) our headtorches cutting trails through the air with the Milky Way visible above. Not having my tripod with me on this particular day (we were trying to travel as light as possible, considering that we were carrying all of our bivvy gear alongside the usual climbing gear) I placed the camera on a nearby rock and lined up the shot as best I could. 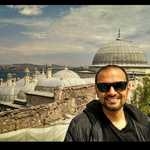 John, Paul, Joost, David Wade and 3 others said thanks.

Other moments in Kosh-Agachsky District