I assume, from combing the internet, that this may be the white stemmed gum moth. He was pretty big, maybe 15 cm, nearly six inches, in wingspan. When he flew past my ear, I thought, at first, he was a bat, but he landed on the window screen to show me his handsome, if rather mottled, colouration. You can recognise this one as a male due to his feathery antennae, which he uses to smell out females.

We have always (I think mistakenly) called them Bogongs, which are renowned in the nation’s capitol for flying en masse on their way up to the High Country to summer over in caves. Apparently, the true Bogong is similar in colour but has more clearly defined markings. If eaten, it’s a good source of protein and fat.

The white stemmed gum moth, on the other hand, emerges from a rather dangerous caterpillar which is best not handled due to its dense coat of short, sharp bristles that easily penetrate the skin in a painful manner and almost impossible to extract. So, I think I prefer to leave you with an contemporary representation of the Bogong moth created by a talented indigenous artist named Danielle Burford. Her beautiful representation seems to indicate that the Bogong has rather more to tell us about life than the white stemmed gum moth. 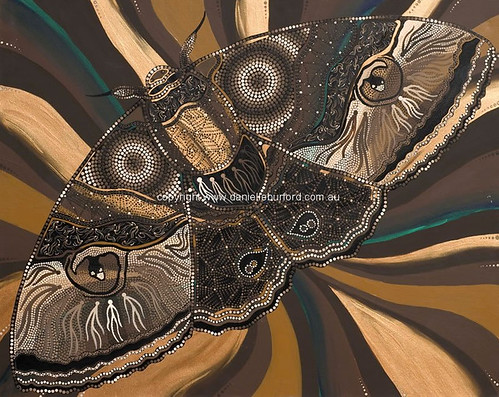 Adrian, Steve, Hadge, Lia and 4 others said thanks.