New Year's Day hike to the summit of Cadillac Mountain for sun rise = Best Celebration yet!

I woke up in a daze after head bobbing in and out of sleep for the past hour. Three friends and I had just driven from Connecticut and arrived in the parking lot at the base of Cadillac Mountain. I looked at my phone, it read 4:45 am. It was time to get ready to hike. “One of the first people in the United States to see the sunrise on New Year’s Day!” we thought it was a great alternative way to spend the holiday. Little did I understand, how difficult the next two hours were going to be.

Three and a half miles is the length of the summit road up to the peak of the mountain. On Wednesday, it was not a road; it was an arduous trek of step after step quad blasting and wind whipping length. The snow beneath my feet crunched with every step and every time I rounded a corner another hill appeared before me. It reminded me of when I was a child and I had to strain my neck to look up to my taller uncles. The trail would not end.

Finally, we reached the top. The sun had not yet shown its majestic beauty above the horizon. There were about twenty other people, two dogs, and a person in a tent who had also made the climb. We had made it too. Except for the clouds on the horizon, the skies were clear and the Atlantic was sparkling. My muscles were burning, and through all my clothing, the wind was piercing my bones. For fifteen minutes we waited before the first rays of daylight and warmth lit up the mountain top. Then it happened. The bright, blinding orange ball rose above the clouds and the first warmth of the day came with it. Everyone on top yelled, “Happy New Year!” It was a beautiful sight and an amazing experience.

Out of all the New Year’s celebrations past and ones yet to happen, I will always remember this as the best start to the new year. We chose not to use technology and watch the ball drop, but to physically climb to the highest point on the eastern seaboard and watch the sun rise.

Liked that moment?
Subscribe to Andrew and get their extensions as they publish them. 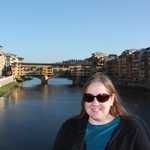 David Wade and Sarah said thanks.

Other moments in Bar Harbor