I think I have a new favorite thing in Japan - the Rotenburo.

It means “outdoor bath,” and refers to an outdoor onsen, or hot spring. I’d been in a onsen before, but it was inside, and I was honestly pretty underwhelmed.

You see, onsen are a huge thing in Japan. All the time, Japanese people will ask you (as a foreigner) if you’ve been in an onsen yet. When I told them “no,” I’d get the universal “eeeeeehhhhh??” - the main Japanese expression of surprise. They would then urge me to go right away, and usually give me a tip on where there’s one nearby to where I live or go to school.

But when I went in for the first time, I thought it was pretty normal. It felt like I was in a hot bath, except the bath was so hot that it was unpleasant, and even the Japanese friend I went in with told me how unbearable hot it was.

The hot spring in the picture is called Maguse Onsen. Nestled in the mountains of Nagano, it’s fairly small and is mostly visited by locals in the village, as they can buy yearly passes and even get a few free tickets per year. Apparently it got featured on a TV or two a few years back, but there were only a couple people there from out of town when I went.

I can see why it got featured, though, as the view is absolutely insane. You sit there in the bath, looking out over snow-capped mountains and small houses spread about the valley. It’s the dead of winter right now, so a chilly breeze was constantly thee, but it balanced the steaming water in the perfect way. I can’t even imagine going in the summer, as the effect would be completely lost.

Pictures never do anything justice, but it’s especially true here. You just have to go - if not to this onsen, then at least another that has a Rotenburo with a view. 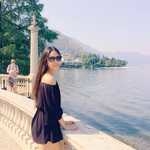