Road life shows me too many people like her, for me to ignore them. I try to tell myself that they wouldn’t want me to identify with them…I have a car, I have a job (at least most of the time), I’m never not coming from somewhere warm and dry and on my way to another such place.

But even if they’d disdain my companionship, I can’t help feeling it. I’ve been so afraid of ending up like them, felt right on the edge of it more than once.

Maybe they don’t get as scared, or lonely, or despairing as I do. Maybe they’re tougher than me—I’ve no doubt they are.

Still, we all need help sometimes. Lord knows I’ve received it. So it feels a little weird, if not immoral, to drive right past them.

My agreement with God and myself was that when anyone asks me for something specific—food, five bucks, even a beer—I’ll give it to them, if I possibly can.

Tonight, though, I’ve had enough. Of everything. Of waiting on money I’ve earned. Of hustling new work, to no avail. Of carefully parceling out expenditures. Of changing appointments to next week, because I can’t pay for them this week. Of cutting myself off at the stroke of six, because I can only justify drinks during happy hour.

So when I see her standing at the entrance to New Seasons (where I’m going to pick up a carton of eggs, nothing more), my heart sinks. I steal a look over my shoulder as I walk past her; sure enough, her sign is asking for food.

I take my time sampling the soups at the deli bar. What’s it to anyone if I’m buying it for someone else? I’m still allowed to reflect.

I dither over the size of the carton. A dollar more buys twice as much…or it could buy a third of a carton of eggs.

As I huddle over the vat, I greedily soak in the steam. I’m assuming she’d want soup because I am cold. It’s fucking Portland, I think, ladling viciously, and this soup has dairy in it — she probably has an allergy, or a religious objection.

Then I chastise myself for selfish idiocy, and throw several packets of crackers into the bag, and pay for it, and walk outside, thinking “Ten bucks says she’s already gone.”

But she’s not. She’s in the same place as before, talking to another young woman who is standing so near the exit that I have to stop short, to keep from bumping into her. My eyes hit the ground in passive politeness, moments after noting the wide eyes and petrified grin on the young woman’s face. The hungry girl is saying,

Around her feet—the hungry girl’s—are a bag of apples, a loaf of bread in a paper sleeve, and another brown bag I can’t see into.

My feet pick up steam, swinging me around the young woman, who is leaning a tentative foot toward the parking lot, and are barely behind the slammed door of my car before the carton lid drops and the spoon is in my mouth.

Liked that moment?
Subscribe to Chelsea and get their extensions as they publish them. 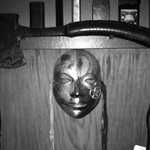