A single metal pipe feeds geothermal water into an octagonal pool, and with my feet pressed up against one edge of the rim a local resident starts to vigorously pummel my back. Across the octagon a Che-bearded gentleman sits perfectly still lathered in shampoo from head to toe, and to my left my driver and a greying member of the local community converse about life, football and the foreigner sitting in their midst.

The social nature of this public bath is the reason why I end up staying longer than expected – a chance to observe and interact with the male residents from the mountain village of Ab Karb that drift in and out over the course of our two hour stay. Bath house nudity is not appreciated here, unlike say a similar venue in China or Japan which explains why 30 minutes ago I was led through the village to find something suitable to wear. Walking out the store 20 Rials (1.7 Euro) lighter and the new owner of a baggy swimming costume with a crude ‘Speedo’ stenciled across its crotch. I’m actually quite happy because another resident eyed up the same pair I ended up buying and the only alternative was Day-Glo green.

The changing area is set back in an alcove no more than a meter from pools edge and later as we leave I see that after 2 hours in here the clothes have a gentle steam pressed feel to them. The first few minutes are spent observing local bathhouse etiquette: everyone greets one another with an salaam; street clothes and shoes are OK poolside until you get changed (a big no-no in Japan); and once changed new arrivals can make themselves comfortable on any untaken edge of the octagon; its acceptable to request or give back scrubs and a rudimentary back massage; though strangely no-one actually enters the pool preferring to draw water using plastics buckets and pour on water. The reason for this immediately apparent on first contact with the water it is far to hot to dip body parts into for any length of time.

During my student years in London a female flat mate and I used to visit the same sauna complex York Hall in Bethnal Green on different gender segregated days of the week. She relayed to me that the women pretty much kept to themselves, whereas on male days people were quite sociable. Actually a few men went beyond sociable to intimate for some it had a double function as a gay pick up joint. But by and large it was a space in which communication was not considered taboo.

As we walk into the sunlight, sulphur cleaned, two thoughts occur to me – as there are more ways to support distance relationships and live more virtual lives, does this put greater emphasis on face to face social interaction in common core activities such as eating and bathing? And how what would be different in a society where communal mixed gender bathing was the norm?

Liked that moment?
Subscribe to Jan and get their extensions as they publish them. 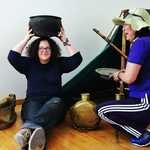 Craig, Sam and Christine said thanks.