Smoothie ingredients are an absurd amount, but reflections are priceless…

It was 3.9°C with overcast. The breeze was light.

I finally set up my fancy schmancy Ninja blender… which would be quite a nice accomplishment, except it was gifted to me in mid-December (a Christmas present from the parents) and it’s been sitting on the kitchen counter in its slowly-gathering-dust box for three months. Whoops.

After the base was plugged in and the parts all handwashed (because I do that now!), I took to the much-more enjoyable task of finding inspiring smoothie recipes with gusto. After all, one couldn’t just start throwing random bits and pieces into a brand new blender! A smoothie is an art project, with careful research, measured out portions, and beautiful, bright ingredients.

As I drove home with three bags of fresh Whole Foods goodness—bags of chia seeds, organic kale, cacao nibs, goat’s milk yogurt, all the basics—he flashed through my mind.

My ex-husband’s best friend Stephen was practically my second husband. Well, no, he was practically my first husband. While Husband was the real deal, the legally-til-death-do-us-part guy, Stephen was the one I had some semblance of an emotional connection to. While Huz went to work, Stephen and I (professional runner and her coach) would spend most of our days together. Neither of us liked cleaning and neither of us was good at cooking, so lunches out, marathons of Netflix, afternoon runs were our schedule du jour. Huz would come home, whip up a fantastic dinner out of nothing (always a struggle for me) and clean up the kitchen afterwards. The deal was that he would cook and I would clean, but I developed a severe allergy to dishes and sweeping and dusting and never found the ability to get my chores done.

“Face it, you wouldn’t survive if your husband wasn’t doing everything for you!” Stephen would laugh.

“Everything?? No. I obviously survived for years before him. It’s not like he spoons food into my mouth,” I retorted.

“Yeah, he does. You burn toast! In the toaster! You wouldn’t eat if he didn’t put a plate in front of you.”

Driving home yesterday, I saw the truth in Stephen’s words. That girl wouldn’t eat if she wasn’t spoon-fed a meal. There was a week in grad school where I lived off a frozen key lime pie. I’d stick my fork straight into it, have as much as my greedy belly desired, then shove it back into the fridge. It lasted about three days. Then there were my usual meals: cupcakes and coffee, Chipotle burritos, pasta with barely-warmed up red sauce (that was my specialty). My husband was health-conscious and good with a knife, able to look at an empty pantry and come up with a satisfying meal, and patient enough to clean up as soon as he was done in the kitchen.

It’s been eight months since we’ve lived together. Somehow, I’ve managed to survive.

It started slow: big salads with mangled cut-up veggies. Egg scrambles. Ground beef tacos that began to get fancier and healtheir garnishes. Then I graduated to tofu scrambles, turned it into a taco, and ate my dinners half in shock, half in glee. Healthy food that I concocted (with the help of the internet, of course)! And now here I was, unpacking romaine and spinach and kale and cilantro and beets and greek yogurt and flax seed.

How hard would Stephen laugh if he saw me?

Liked that moment?
Subscribe to Stephanie and get their extensions as they publish them. 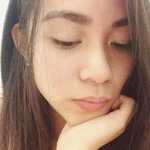 Max, Kristen, Adrian, Paul and 7 others said thanks.

A make-it-happen kind of girl. My worlds: a steeplechaser sponsored by New Balance and training with Furman Elite in Greenville, SC | The Fête Blog | Be Loved PR | University of Virginia grad

Other moments in Greenville