It was 6°C with scattered clouds. There was moderate breeze.

My friend got a turkey from the woman at his local mercado. “Pavo?” he asked. “Tienes pavo?”

She shook her head, like everybody else had, but with an addendum. She could special order one for us — what size?

“Twenty pounds?” my friend estimated with his hands.

She called her guy. There was a long pause. She pressed the phone to her shoulder to muffle the receiver.

“He’s looking out his window.”

My friend and I laughed with delight. This farmer, looking out his window, gauging his turkey’s weight by sight. We had won!

(The next day, when we arrived to pick it up, she was still plucking feathers from the body.)

Thanksgiving is hard to come by in Pamplona. There are no cranberries, hardly any sweet potatoes, and not many Americans. We invited a Belgian, a Peruvian, and a Spaniard. We explained the sick legacy of our national holiday. They loved it.

We talked mostly in Spanish. We made apple pie; served thickly-crusted slices with ice-cream and cookies.

We ate and told jokes until we were crying with laughter.

“Your sense of humor is exactly the same in Spanish as it is in English,” I told my friend.

“You sound like a teenager in Spanish AND in English,” my friend retorted.

We ate and told more jokes. We stopped making sense. We listened to Motown. We sang songs instead of talking. We had another piece of pie.

All in all, I would say, a wild success. (But that’s just one opinion.) 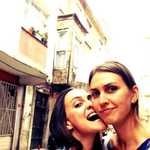 Kate, Kristen, Adrian, Mona and 8 others said thanks.