This is an answer to the question, "where did you grow up?"

It was 19°C with few clouds. There was moderate breeze.

I used to drive down to this beach. There was one week, in winter, when my parents had gone away somewhere, and I would come down after breakfast to take the dog for a walk. I drove the big Ford pickup so that the dog could roll around in seaweed and shit and wouldn’t stink up the inside of my car. I was 16 and obsessed with visiting England; I was looking at colleges and the only thing I really cared about was whether or not they had a study abroad program there. So I would walk along the shoreline, for half a mile or so, and then I would call the dog and we would walk back, and all the while I was daydreaming about England. Once I came back to the truck and realized I’d left the headlights on. There was nobody else around, and the dog was covered in the stench of dead fish, and I thought, great, my parents leave me alone for a week and this is what happens, but I got lucky: the truck started, and off I drove. (The college I ended up at didn’t have a study abroad program in England, but I ended up living there anyway.)

Here’s a complicated fact of time and math: at a certain point, I will have lived elsewhere for longer than I ever lived here, but here will nevertheless always be the place I grew up.

“Here in Oxford, the one really decisive factor is […] that there’s no one here who knew me as a young man or as a child. That’s what really troubles me, leaving the world behind and having no previous existence in this world, there being no witness here to my continuity, to the fact that I haven’t always swum in this water.”

At a certain point, though, if you stay somewhere, this ceases to be true. Even if no one here knew you when you were a child, people here did know you when you were young, or younger. After a number of years it is no longer possible to claim immunity from the banality and embarrassment of belonging, of not only remembering but also of being remembered. I haven’t always swum in this water, but I’ve swum in this water for awhile now, this water and I are well acquainted.

This water and I really are well acquainted, even if I’m just a visitor now. Yesterday we drove down to this beach and I went for a swim, in a wetsuit that was too big and let all the water in. I’m used to swimming in Oxford, in a heated indoor pool, with lanes and goggles and other bodies. Still, it was pretty nice when we looked up and saw dolphins fishing; they were maybe 20 meters away. We got out of the water and the dolphins came in, as close to the shore as we’d been, then even closer. There were a few other people standing up on the cliffs; we were all saying, “I’ve never seen them come this close!” and “They’re so fast!”, watching as they flitted up and down the coast.

Liked that moment?
Subscribe to Miranda and get their extensions as they publish them. 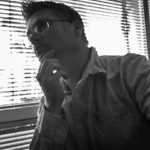 Other moments in Goleta