It was 4°C with few clouds. The breeze was gentle.

It was my first — and, as of this writing, only — visit to the town of Milton Keynes, one of a handful of ‘new towns’ created during the 1960s in an effort to relieve housing congestion in London.

I was looking forward to visiting Milton Keynes to see what a designed city might look like in England; the US, especially around Miami, where I spent most of my life until a few years ago, is almost entirely ‘planned’ in that sense, and the result is usually grid systems and concrete. Would the 1960s British version look and feel similar?

Upon arrival, I was greeted by what felt like a ghost town: stepping out of the station, I could see all the signs of civilisation — cars, buildings, trash bins — but nearly no people. The vision of all the inhabitants sitting at desks inside the myriad office buildings within view did nothing to help matters: My imagination immediately had them staring blankly at glowing screens, looking much like the cast of Apple’s famed ‘1984’ television ad.

Contrary to my experience elsewhere in England, concrete and glass were the main materials in sight, and the layout of buildings, roads, and walkways was very much grid-based: It felt like I had stepped into Minneapolis — quite literally, as I had stayed there last year, and ‘industrial middle-America’ was the first thought that came to mind.

The walk to the hotel exposed some nice touches, however, such as the near-complete separation of automobile and pedestrian routes (I never once had to wait at a crosswalk between the station and my hotel, though there were a few to be found during my stay). However, during the 10-minute walk to my hotel, I barely saw another human, and those I passed had the same, dead, robotic look in their eyes as people on the Underground in London.

During my two-day visit, I didn’t get to explore much of the city — it doesn’t present itself as walking-friendly, much like many American cities. Looking out from my hotel room the next morning, I felt a momentary panic as I flashed back to any number of hotel visits in various US cities. Had I finally been traveling enough to forget which country I was in this time?

My favourite elements of cities — some of them within the US, but mostly elsewhere — are the exposed layers of construction, generations of buildings, roads, and walls that tell the story of how a place came to be, of its changing requirements over time, and how its inhabitants responded. Modern cities like Milton Keynes and its ilk are missing these markers through no fault of their own, as their timeline has only just started, but their absence screams louder than the brutalist structures that stand so stoically along the gridded streets.

How strange, then, that such a new town, a new city, can feel like it exists at the end of the world. 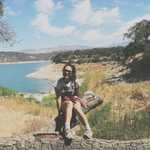 Sanna, Eileen, Elisa, Paul and 6 others said thanks.

Other moments in Milton Keynes