A series of related statements:

• I like my home, but I do not feel safe here — “safe” being the imaginary thing that follows the imaginary word “home,” in certain parts of the world only.

• I’d left the water out overnight and it’d gone bad, which is the word for when bored mosquitoes collect on its surface and we don’t want to drink it anymore.

• Moonshine is a home-fermented liquor that is unregulated and very strong. It’s usually made from corn, but it can honestly be made from anything fermentable and still be called moonshine. What each of its different forms have in common is that they make you thirsty. They make you thirsty, and the water is bad. What we did have was instant coffee. I boiled the mosquitoes and mixed them into a packet.

• The five daughters who worked at the modest grocery story by the fisherman’s dock waited for me to come home, hiding in an excited clump — like smiley grapes — inside the door of their shack-ish little shop.

• “Hellooo, mister!” they screamed at me, which was the only English they knew. Me, a smiley grape, too.

• This story is not true in many ways, but truer in many more. I know a lot of people with Identity, even when it’s hyphenated and complicated. Their identity is a negative formation, a reaction to something: not That but This, because after awhile, This became very important. Everybody who was That had got bored and gone looking elsewhere. So, sometimes, I think that This is a bit of a theft; Once upon a time, some people who were This left a record behind in science-fiction books, and the Thats found it and decoded everything. Pretty soon, they were wearing a different kind of jeans and putting their hands on their hips, while being very loud and meaningless.

• I collect eggs from the chickens in a shallow, plastic container. You’re not supposed to boil fresh eggs because they don’t peel as easy.

• It’s raining in both Brooklyn and Kudat right now. E. is in Kudat, and I think that she is watching the rain from the little window of her sailboat, rocking gently in a harbor.

• The eggs split when I boiled them. 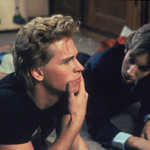 Jace, Robin, Adrian, Sanna and 7 others said thanks.

Other moments in Kumai