It was 11°C with clouds and visibility OK. The breeze was gentle.

It’s dark. And cold. But it’s okay, because you are charged by an energy of knowing you are about to witness something special. As you walk towards the warehouses miniature tractors stacked with styrofoam crates and boxes zoom around. Tens of men and women in oversized rubber boots with matching poofy black jackets are rushing in all directions yelling:

If you don’t speak the language the shouting from people known to the world as polite and quiet, could easily be misinterpreted as some sort of war cry. After all, these men and women get up at the crack of dawn for fish.

Some sell the fish in a freezing cold warehouse to the crowds pushing and shoving their ways to the front. Some may transport the heaps of fish with the miniature tractors. Others may be cooking the fish at one of the many sushi restaurants with tourists milling about. Or others man the retail storefronts.

Whatever their roles, these people aren’t at Tsukiji Market to Instagram or blog about being at Tsukiji Market. These men and women wake up everyday at ungodly hours for fish — their crafts, and their trades. Of course a motivating ritualistic chant would make sense, as the same words echo from different directions: doke, doke! Jyama, jyama, jyama!!

Well. Sorry to break it to you, but these men and women aren’t collectively shouting some ancient ritualistic chant. They are yelling because they are annoyed. Doke means move. Jyama is outta my way.

After spending over a decade in New York, irritating another person for simply existing should be nostalgic, but this is Japan. The country that prides itself on hospitality; so much so, there is even a word for the spirit of generosity and warmth this country provides in their customer service: omotenashi. In NY, being treated as if we don’t belong is commonplace. In Japan, it just doesn’t seem right.

I’ve been to Tsukiji three times. Once out of curiosity, twice because I was pressured from out of town visitors. I get an email as soon as they land: We are in Japan for the first time! You know we love sushi! Tsukiji is the one place I want to go! If I go with a Japanese speaker, it’ll make us the happiest people in the whole wide world! So I went. Not once. Not twice. But three times and all three times, I wished I stayed in bed. (You need to arrive around 5 am for a chance to see the auction.)

I’m not broken up about Tsukiji closing and if you missed out, don’t feel bad. You’re not missing out on very much.

Besides, Tsukiji isn’t closing. The market is just relocating. Again

Long ago in the Edo Period, the emperor (Tokugawa Ieyasu) invited fishermen from around Japan the opportunity to sell fish used in the castle. Three markets popped up within the vicinity. After a law was put into place by a massive riot over food shortage to centralize a market and a colossal earthquake in 1923 destroyed the central market, Tsukiji was born. All was well until the late 2000s, when a sushi movement gained momentum outside of Japan.

Then foodies began springing up around the world, closely followed by food bloggers, who relentlessly and shamelessly barraged Tsukiji Fish Market — a place of business, mind you — and distrupted the market place. As Japanese food and sushi gained more global popularity (Jiro Dreams of Sushi anyone?), the number of tourists increased ten-fold. Tourism was such a problem, regulations were put into place to manage the crowd.

“Various problems have arisen in association with the increased number of tourists (including sanitation management problems such as temperature control issues caused by the entry and exit of large numbers of unauthorized persons, and problems with visitors impeding the auction and other trading activities), especially at the early morning auction held in the tuna wholesale area. For these reasons, tourists are not allowed to enter the wholesaling areas which are especially crowded.”

While I understand how Tsukiji is appealing (I was one of them) the people of the market are there to do their job: sell fish. 99% of the people who work at Tsukiji don’t even speak English. And suddenly, hundreds and thousands of tourists with their gigantic DSLR cameras are wandering their work place, mindlessly setting up tripods without care to their surroundings.

When I see photos and videos of Tsukiji when the market first caught the world’s attention, a lot of the footage is almost endearing. You can see the delight in the worker’s faces for being treated like celebrities as a professional fish person — monger, auctioneer, fisherman, purveyor, fish market chef — isn’t a sexy job; why wouldn’t they be excited by the fussing from foreigners? The Japanese are also notorious for being flattered when foreigners pay them mind.

But in 2015, the initial flattery the professional fish people felt 8 or so years ago, seems to have transformed into exasperation. And depending on the person, escalated from annoyance into border-line anger.

On one of my trips, the dedicated police force for Tsukiji Market (as silly as it sounds, there is a unit just for the market, they even have their own police hut) heard me speaking English. When I turned to them to ask for directions in Japanese joy filled the cranky officer’s faces and I suddenly found myself involuntarily working as a traffic cop directing human traffic.

One of the officers pointed to a rowdy American tourist wearing a Google t-shirt and said to me in Japanese: Please tell Google-kun (kun is a diminutive for males, usually a term for endearment but can be used to condescend another. Guess how kun was used here?) to go home, he is drunk.

And he was. The guy was double-fisting beer cans and from his wrinkled attire, slurred speech, messy hair, and carried a stink as though he dragged the bar along with him, he was probably still out from the night before, decided to pull an all nighter, and ended up at Tsukiji Market.

After I got rid of Google-kun for the officers, it continued: can you tell that group to move? Tell those people with their equipment (mega cameras) they are taking up too much space. Hey, let those people know recording video is frowned upon. Oh god, they are using flash, tell them to stop that.

When I finally said I had to be on my way, the now jolly officers told me to come back any time. Sure, maybe in another lifetime.

Since most of the people who work at Tsukiji don’t speak English, non-Japanese are fortunate to miss out on the bad mouthing. Everywhere, Tsukiji workers complain about how people are annoying, they’re always in the way, they don’t pay attention to surroundings, take too many photos, etc., etc. The professional fish people don’t care for tourists. (I pretended I didn’t speak Japanese.)

There’s even a man who works for one of the sushi restaurants inside Tsukiji who is known for his rudeness. On Trip Advisor, they deem him “rude man”. I also had the misfortune of crossing his path and remember curtly stating in Japanese: There is no need to be so aggressive and rude. He was taken aback. And he is only one of the many sour people there. I get that us commoners are intruding on workplaces, but come on, there is no reason for everyone to be so mean.

After my first trip, I was puzzled why people rave about Tsukiji. Maybe the language barrier casts a spell and tricks tourist’s memories to believe the market is a magical place. But after trips two and three, I left the market exactly as I did my first trip: almost hating my own people. I would think functioning humans in civilized societies can pick up on social cues as body language and facial expressions but no. People still love Tsukiji. Trickery, I tell you.

So to any and all bummed out about missing out on seeing Tsukiji Market for yourselves, do not fret. You’re not missing out on much. If anything, be relieved you weren’t temporarily brain washed into believing this market filled with cranks is like Disneyland for food lovers.

Bonus: two random shots from my sushi breakfast at Daiwa. I mean the sushi is good but not good enough to queue, get elbowed by tourists, and yelled at by ‘rude man’. There was also too much rice for my liking. 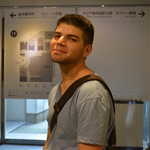 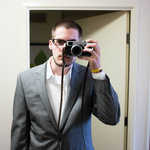 Sanna, Ragini, Vivien, Yiling and 12 others said thanks.

Other moments in Chūō-ku