After years of mocking ugly pet dogs, the kind that grannies like to keep, the kind that seems to have been crossbred with rats rather than descended from wolves, one of them took it upon himself to bite back and make me regret my years of unkind thoughts.

As I crossed the street to the convenience store opposite the train station where we were waiting for our ride back to Tokyo after a gruelling 24km training on the hills of the famed Hasetsune trail race during which I had survived certain heart failure, near blindness from rogue venomous wooden sticks and likely impalement on wind-toppled tree trunks, a stinking degenerate angry furry ball took the best shot at my right calf after jumping out of the side of an equally detestable old witch.

Its small rotten jaw only scratched my skin and punctured my running tights but the result probably has the entire population of ugly dogs of Japan celebrate: 3 trips to the hospital, 10 days of antibiotics, a tetanus booster vaccination and possibly the rabies shots too, because although no case of rabies from dog bites has been reported in 50 years, if one dog has it, that dog does. 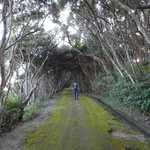 Sanna, Daisuke, Sara, Amal and 14 others said thanks.