There was talk of poopies and pee-pee and farts.

We ate seaweed and it made me think about how I grew up not eating seaweed. Grew up with Oscar Meyer’s Bologna and Spaghetti-Os.

The first time I ever ate seaweed — was made aware of seaweed as a thing edible and delicious — was not until I was 19 or 20. Well beyond five. Even then, I wasn’t in love with seaweed. Didn’t fall in love with seaweed until years later. Now, I could eat seaweed — sometimes do — endlessly. Packet after packet, wondering all the while what kind of chemicals go into the seaweed production process. Yet not stopping until it’s all gone. Seaweed and a good beer.

But here was a five year-old from whom I asked, politely, to share in her dried seaweed snack. She was exceedingly gracious, handing over sheet upon sheet, me a seaweed eating machine, her eventually tiring of methods civilized, the arrangement devolving into a circus of throwing and shoving seaweed crumbs into my mouth as I tried to escape.

Running after me: Would you eat an eyeball and chocolate poopie? she asked.

Of course, I responded, but only if they were wrapped in seaweed.

She giggled and took off into her room. I went back onto the balcony to watch the sun set and check on the salmon thinking, yes, seaweed wrapping … I’ll have to try that next time. 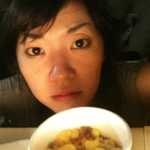 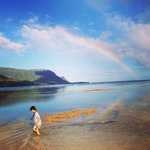 Amal, Ryan, Cassie, Christine and 5 others said thanks.