Where everyone was equal

Today was Janet Fisher’s funeral, in mad weather, high above Yorkshire in a fold holding a Quaker meeting room. One minute snow and sleet, then bright sunshine, grey roiling cloud, bright buds on the trees.

Instead I am thinking calm white light, snow, sunshine, that simple white space, that candelabra. Thinking Finland in High Flatts, Vaasa in Yorkshire, our Interland writers exchange, Janet and Ray coming along with Adam, Anne, Carita, Eavan, Kath, Marko, Ralf, Tiina, Ulla. People full of light and modesty and laughter. Everyone equal. Writers and friends who would be here if they could.

When everyone had gone, Peter Sansom and I stood shivering at the top of the lane above the fold, wind blowing under our coats and though our knees, the blue sky slipping into sleet. He said he couldn’t believe how sudden death was, how final, how it just shouldn’t be, like not-death was a possibility, and for a second it felt like it was.

A white van stopped and a guy who had been at Janet’s funeral asked if we needed a lift to the wake at The Fountain. We thanked him, we were OK, Peter had his car, I was waiting for a taxi, we said we couldn’t believe how high up we were and he showed us where we might see things on a clear day, the power stations, the Wolds, right across to North Yorkshire, the North Sea. We could see them all, almost.

My taxi came and I caught a train and went to a meeting about how you measure art.

The more people talked the more I valued the silence in this high Quaker room where people sat with their eyes closed or looked at the bright windows, filling themselves with all the things Janet was, everybody equal, full of light and modesty, laughter, and Janet sitting there still, one of us. 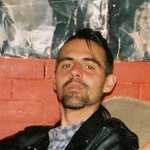 David Wade, Peter, Mark, Sheila and 2 others said thanks.