My Window on the World

When I first came to Australia forty five years ago, my window on the world was wide: both philosophically and geographically expansionary, so to speak. Yes, the Atomic Bomb was already a real threat, but Australia seemed a relatively safe place from which to view the universe. And indeed relatively safe to venture out from.

The idea of being safe Down Under was of course an illusion, although I have met more than one person who immigrated to Oz to “escape” the nuclear annihilation that in those days seemed so likely. Nowadays, we have apparently forgotten all about atomic apocalypse though I feel quite sure that such a threat is even greater now than it was fifty years ago. Furthermore, polluting the atmosphere is a rather more serious threat than we ever dreamed back then. Climate change indeed threatens our island nation as much as it threatens any other.

Now, I am quite content to look out from behind my window of wattle, our national flower, and let the world pass me by. 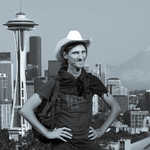 Adrian, Lloyd, Eilert, Ken and 5 others said thanks.