A lovely April afternoon in downtown Woodstock. Food on the mind and peace in my heart.

I stared out of the small mom and pop shop on the corner street in downtown Woodstock. I distinctly remember the smell of cinnamon permeating the air and I took a look left, a right, and then another left. It was the middle of April so there was still a slight chill in the air, but nothing that a long sleeve shirt couldn’t circumvent, mind you. We traveled from shop to shop pointing in intrigue at the wares in each. Super handmade and super expensive. From the bar of hand soap to the hand carved kayak out of a single tree trunk.

Again the lingering scent of cinnamon. I swear that I could almost taste it.

I spent the majority of that day deep in thought. I wasn’t alive during the Woodstock Festival so I tried desperately to comprehend what it was that seemed so commonplace in the minds of everyone around me.

It wouldn’t be until the end of our sojourn that we saw the man wearing stilts and sporting a very long beard reminiscent of a wizard. There was some kind of music coming from under his multi-colored robe and he wore a hat. I’ll never forget the hat. Something that was a mix between “I’m going fishing” and “I’m going on a safari.” He shined the peace sign at passersby with a small smile on his face.

Most tried to pretend that he wasn’t there or corralled their children away from him. Others got out their smartphones and stopped to take a picture, or have a picture taken with him. I just observed as we walked by. I wouldn’t necessarily call it a eureka moment by any means. But… I think I finally understood a little better.

Maybe there was just a little bit of Woodstock in each of us. Hidden somewhere around one of the aortic valves. Just sitting there, lighting dark places. Waiting for a chance to come out; to make itself known.

Liked that moment?
Subscribe to Ian and get their extensions as they publish them. 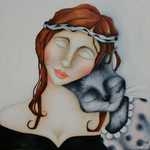