Nearly five years ago about 20 people from our small coastal community gathered at the foot of the Split Point Lighthouse in our town to join a world-wide “climate change wake-up call”. The call was sounded on 21 September 2009, at more than 2600 events in 135 countries around the planet. I well remember the optimism I felt then as our little hamlet became part of that global protest.

Since 2009 the evidence for man-made change has gone from ‘convincing’ to ‘conclusive’. Indeed, it has been pointed out that there is far more evidence that pollution causes climate change than there is that smoking causes lung cancer. During this same period, the time table for the advent of disastrous effects has advanced from the near future to the present.

If you would like to review the current status of the climate change wake up call movement, look here, here, here, and here.

Unfortunately, as we slide ever closer to the coming world catastrophe, we ignore the canaries dying in the mine shaft but like ostriches we hide our heads under the sand. Looking at the pictures of our little group by the lighthouse in 2009, my optimism vanishes. The fact that so few turned out in Aireys Inlet, increasingly threatened by bushfires and sea level rise, now seems prophetic of the coming popular indifference. No doubt, that will change as more people’s lives and property are carried away. 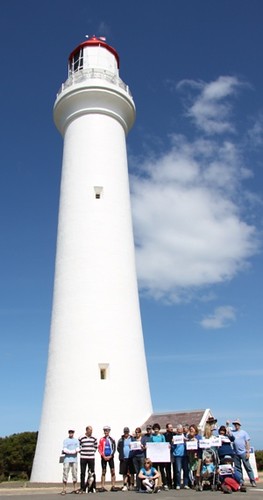 If not Us, then Who?

If not Now, then When?

If not Here, then Where?