It was 13°C with nil significant cloud. The breeze was light.

The first time I saw an Henri Cartier-Bresson exhibition was in the Royal Palaces in Turin. Since then I’ve been slightly obsessed with his work. Snapshots have appeared here and there since then in galleries I’ve visited but seeing that there was going to be a retrospective of his work whilst I was in Paris I knew I had to go.

It was the first thing I did after I stepped off the Eurostar. The sun was beating down and Paris breathed a big ‘BONJOUR’. At the top of the Pompidou you gets one of the most fantastic views of the city. The above being one of them. I waited for around an hour to get in but with a book in hand, intuitive mind and this view it wasn’t so bad. 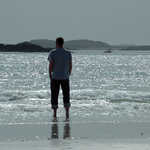