I took this picture of my best friend, Ashley, this past weekend.

She randomly decided to sit here since it was the only shady place from the hot, Sunday afternoon heat.

I thought it was pretty hilarious how much she had camouflaged with the flowers and couldn’t pass up the opportunity to Instagram it with the caption, “Where’s Ashley?”

However, after reflecting on this picture more, I can’t help but see this moment as something I’ve been asking myself and wondering about others throughout this summer.

Where did you go?

A picture may capture the present, but it doesn’t explain the context.

To be honest, things were a bit weird between me and Ashley that day. We had just come back from a beach trip that weekend, and I think we were just tired of each other. On top of that, we knew that we had both changed from college. We just refused to believe it.

I remember just looking at her from this angle and thinking if I really even knew her anymore.

Where did you go?

We are already such opposites, but somehow it always worked perfectly throughout middle and high school. But, I was scared that after college, the differences in our beliefs/lifestyle had grown too far apart. I missed how things were before. I missed the old me and the old her.

Generally speaking, coming back from the first of college has been really weird.

The dynamic between your close friends just doesn’t naturally flow as well and your home doesn’t feel like it used to. What even is the definition of “home?”

I feel like the meaning of home is being misconstrued, lost and continually redefined as we grow up. Is LA my home? Or Berkeley? The ephemeral nature that comes with the comforts of familiarity and routine is frankly, terrifying.

Conversations with my peers now revolve around how one’s job or internship is going. I’m forced to act, talk and behave like an adult when in reality, I still feel like I’m 16.

Is this how adults really are? Do they even know what they’re doing? Or did they just fake it until they made it? Am I supposed to do that, too? But, that’s so draining and I don’t want to do that. Am I even an adult now?

These are the thoughts and anxieties that routinely surface as I lay in bed every night.

I don’t know. Lately I’ve been catching myself saying things and behaving in ways that are so unlike me that I scare myself.

Where did I go?

It’s been really hard for me to love lately.

People can just be so astonishingly selfish. I think my heart has hardened and I can see its visible effects on my friends and family. I’ve been pushing away the ones I love the most because I honestly do fear intimacy.

And I know that every girl says that, but seriously, vulnerability is fucking scary and uncomfortable and I usually avoid it at all times. I fear showing weakness, so I put on the mask of being undefeatable. But, at the same time, it can get so exhausting and lonely when you pretend that you don’t need anybody.

I need to learn how to kill my pride, open up and let people in.

But, to end on an optimistic note, I can honestly say that I’m excited for what’s to come. I just want to keep growing and most importantly, I want to keep loving.

True strength is retaining your sense of empathy even if people/the world lets you down.

What a funny, confusing and promising time to be alive.

Liked that moment?
Subscribe to Grace and get their extensions as they publish them. 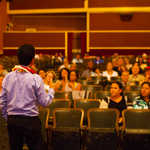 Matthew and Hedaya said thanks.

an ambivert roaming in between los angeles & berkeley

Other moments in Pasadena