Tell Me About Magic

It was last year when I decided to join the theatre program at school. I was so excited to be a part of such a diverse, talented group of people my age. My second year of high school, on a September morning, I walked into the workshop of the theater and right into a world with established cliques, friendships, and inside jokes I could never be a part of. It was easy to feel lonely, sometimes even inadequate for not being able to establish my place among them (it was later when I realized how much of a blessing that was). We spent a month in the shop building an underground apartment in the heart of New York City in the 1900s. I must have said two words. But it was okay, because I loved being in an environment so foreign I could learn something new every direction I looked. Nothing could have prepared me for the cast finally coming to rehearse on the set for the first time. I was shocked that a group of teenagers without costumes, proper lighting, or any sound effects at all could take me back to New York City in the 1900s. And when all of the elements came together, in the whirlwind of emotions I felt, the one that stood out the most was pride. I got to watch people I had seen in the hallways walk on to a stage express themselves in a strawberry vendor, a German con artist, and old woman, or a Portugese sailor. People I’d never even seen before filled the auditorium with passion. It was magical, and I felt absolutely priviliged to be a part of it. My job as a shift crew member was to occasionally run out on stage during a blackout and move props. I loved the feeling of adreneline as I waited for my cues and the relief I felt when everything went well. I spent most of the show sitting backstage with a deck manager I wasn’t particularily fond of, reading a novel in which popular crime authors retell fairy tales. I must have sat through fifteen performances of “My Sister Eileen,” but I never got tired of it. My role was not the most significant, but it didn’t matter. I was happy just to be there. Tell me about magic. I once heard someone who’s been in the program for one year longer than I have say to someone, “Oh you’re barely even a theatre kid, come on.” I beg to differ. It doesn’t matter if you grew up onstage or if you turned 15 on the set of an underground apartment in New York, all because you decided to walk into the theater wokshop Septmeber morning your second year of high school. If you see the magic that can be produced onstage, you belong here.

Liked that moment?
Subscribe to Maddie and get their extensions as they publish them. 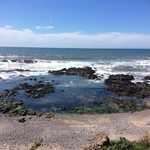 Other moments in Stockton