The preparation for my trip to NYC to celebrate my 60th birthday with my twin started almost two weeks before packing my overnight bag. The return trip from a week end running the Louisville mini took 50 minutes longer than expected (multiple accidents caused unexpected delays) resulting in me missing 5:30 mass. The fall back plan was to attend the 7 pm Spanish mass except I thought mass started at 7:30 and I saunter into mass almost 25 minutes late. I blew off mass which required me to go to confession. Only available time for confession was the eve of my trip. I thought I could get in and out of church in 30 minutes at the most. I was surprised to find the lines wrapping around the church throwing strike one at my chances of getting to bed early. After standing on my feet for 90 minutes and getting absolved. With the guilt associated with missing mass overcome I now had to work on the guild associated with me taking time off work (stupid great american work ethic). I still had the energy and excitement to run a slow 3 mile around the neighborhood. After which I completed packing and filling up the car with gas (ever the boy scout being prepared or maybe it is the engineer in me (even thought ASL keeps telling me I am anything but an engineer)). Finally sat down to eat dinner after 10 once the car was packed. My excitement for the next days trip kept me up reading until well after midnight.

Jump out of bed at 5 am. Well maybe didn’t jump. I got up to the alarm (very unusual - normally I get up unassisted, even at 5 am, I guess I pushed the reading thing a little to hard last night). My morning route was simplified since I already had the car packed and only need to shave, shower and eat. I still didn’t leave the house until 5:55 am. I fought traffic leaving Manassas, something I am unaccustomed to doing since I live one mile from work and a long commute to me is getting stopped for 5 minutes by a train. Solitary car rides are alway made so much more enjoyable when I have a good book on tape. Today’s trip had a great one. I listened to the conclusion of David McCullough’s Wright Brothers. I would be interested to learn more about Orval’s strange spells, especially the one when he disowned his sister Catherine after she married. The Wright Brothers got me to just north of Baltimore and rather than start a new book I decided to get caught up on my WTF pod casts. I had read the primer of Mark’s interview with Ali Wong and how something happened that was a first for his show. Turns out Ali is a new mother and she pump while never breaking in her interview with Mark. My first real understanding of a feminist action. Mark was interested and also supportive. The interview peaked my interest in Ali’s comedy and I went out and Youtube her. He stand up does nothing for me. Got to Kenny’s right on time (10 am).

We hit the road about 10:30 (after a trip to the Wawa for coffee). While KJM got his coffee I was able to return a work email (via the phone) and answer a customer’s question (now I could continue my trip guilt free!). When KJM and I get together after a long absence we talked continuously. KJM told me about his new job (he loves it) and I talked about maybe taking over the leadership position for LGBT at work and how I have always treated everyone at work with respect and everyone (eventually) treats me with respect. Bus trip to the big apple was uneventful. KJM taking advantage of the down time to catch up on his sleep (Kenny is the king of burning the candle at both ends). We were walking around the city by 2 pm trying to find the Knoll show room (KJM works for Knoll) but in typical Mueller fashion we were off by 10 blocks and wouldn’t find it until much later when Joe took us to it. We stumbled upon Joe’s office after KJM spent time in the flower district (Joe’s office is right up the street). Kenny said he was going to get a plant for Joe’s desk and ended up just wondering around finally realizing I was patiently waiting for him as I tried to get comfortable with my surroundings (I am not a big fan of NYC, the crowds intimidate me. The sidewalks were packed at 2 pm on a Thursday afternoon causing me to wonder if any of these people had jobs? I must say the more I visit NYC the more I become confident and comfortable walking around). After brief interdictions at Joe’s office I gave him a pool league umbrella (Joe wasn’t as excited to receive it as I was giving it). We found our way to the Knoll showroom (thanks to Joe) and then to Moma. Now that is an institution that should make NYC and all it’s occupants proud. We got to see (and more importantly take a picture) of Van Gogh’s Starry Night (so vibrant in person) and take in a lot of the other great Impressionist Masters (Cesaine, Dali, Worhal (I know not an impressionist) and Degas. The was a whole room dedicated to Picasa. Picasa’s art is lost on me and Jackson Pollock’s stuff still look like someone just threw paint on the canvas even the color schemes do nothing for me. We were kicked out at exactly 5:30. It was crazy how efficient and pushy the guards were clearing the place out. I did notice the book store stayed open much later than the museum (just like at the Masters the first place everyone visit when going to MoMa is not the fine works of art but the souvenir shop where you can buy knock offs of the priceless pieces of art.

Liked that moment?
Subscribe to Keith and get their extensions as they publish them. 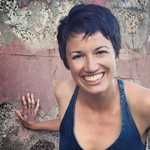