Friday morning run. Struggled to get out of house but need to move

Running last week had been a little rough. After finally feeling like I was adjusting to running in the humid and hot Orlando weather, I struggled on all my runs during the week.

I try to run everyday. Usually I’ll take one or two days off a week, but I don’t schedule my days off, rather I just try to rest when I need it.

I recently moved from New York City, where running was a big part of my life, and where there are many other runners. In Orlando it has been hard to find a community of runners; actually I haven’t found any running groups.

There are many trails and paths around the area, but cycling seems to be the big draw here - lots of riders, but not as many runners.

On this morning I was meeting Liam - the one person from here that I’ve gone running with.

This particular route starts at this spot on a paved path, but then winds through neighborhood streets. Liam put together the route and thankfully has a good memory because there are many turns.

Liked that moment?
Subscribe to Frank and get their extensions as they publish them. 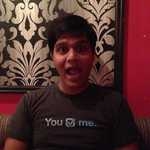 Cassie, Sam and Paul said thanks.

Hoping to make this a quality and quantity word project

Other moments in Casselberry