For my second chemo session Ι arrived on time at 07.30 at room #10 of the chemo ward, but hardly in time. The chemo veterans (older women mostly) had already gotten there from the crack of dawn, apparently, to get to the good reclining chairs; there was only one office chair left for me. I really was in need of a reclining chair though, because the constipation caused by my first chemo had caused an inflammation in my intestine, as it turned out, and I could hardly walk or sit straight from the pain. I was in luck, though, because I was immediately sent to the back-up room across the hall which turned out to be the suite of the chemo ward: three reclining chairs in privacy and quiet.

I picked the single chair on the one side and, soon after, another girl my age arrived and took the one across. At first we were quite, respectful of each other’s privacy, uncertain of the psychological state the other might be in. Eventually, we got to talking, though, about our illness and about our lives. It was 08.30 and we still didn’t know that we were in for a real treat.

Two hours after we got there, after our blood samples were taken, after I was sent for an abdominal X-ray to see what was causing the pain, after the rounds, after the anti-vomiting serum had started dripping, in barges the attending pathologist who had taken over my case after I was admitted to the hospital, one and a half weeks before, and whom I had grown fond of. She was this tall, beautiful woman, always groomed, her dark hair always coiffed, her make-up discreet, her beautiful face accentuated by long, arched eyebrows and warm, smiling eyes. She was a little stern when doing her job (which I respect in a doctor), and maybe slightly pretentious at times, but in a loveable way. She was the one who had come to my room, one day after I was informed by my mom that is was the big C, and had sat on my bed next to me, had taken my hand and had told me, “we’ve got something serious.” I had smiled at her, “I know. But I am ok.” She was very professional, very encouraging, very approachable, and very human. I had thought I would not be seeing her any time soon, but there she was, barging through the open door - two medical students tagging along - giving me a big smile of surprise upon seeing me, and closing the door behind her.

I didn’t immediately get what was happening. I thought they were about to do some sort of simulation, this being a University hospital. It turned out she was actually a patient herself with an illness I had never heard of before - something with the sinus - and she was taking advantage of the free bed. So she lies on the other bed across, smiling at us and joking about how she’ll now see how patients feel. Immediately after, in comes the nurse with an IV drip and adjusts it to her IV catheter, which was already placed on her arm, and, once the serum starts dripping, she starts teaching the two students! [that’s her hand on the picture, between the two girls]

The day’s lesson was how to listen to a patient’s lung during examination. Of course we got to hear all about it as well - and what a great teacher she was! Her love for her students but also for her subject, really came across, with such tenderness, but also humour. She was telling them, “When we ask the patients to inhale for us, we ask them to do it with an open mouth, but we don’t want them sighing like a person in love! We want real breaths!” Laughs. Then she was showing them how to place their hands on the patient’s lower back in order to feel the lungs filling with air: “You know how when you see a chubby baby or a cute guy and you feel like groping them? This is how you should grope the back!” More laughs. At one point I even participated in the lesson. She was telling them, “When we want to hear the way the voice resonates inside the lung, we ask the patient to say trianta-tria to us (that’s thirty-three in Greek). But what language is the best for a patient to say thirty-three in?” “English?” the students replied tentatively. “Not really,” the pathologist said. “Thirty-three sounds wimpish in English.” So I jump in and say “trenta-tre (that’s 33 in Italian)” “That’s right!” she jumps up with a smile. “The best languages to say 33 in are the ones with Latin roots, and also Greek, because you can really hear the tr - tr.” Proud moments!

The girl across me and I had the best chemo session we could ever wish for. I, at least, had such laughs with what she was telling those students, all the while checking with us, “I hope we’re not boring you, ladies.” Was she kidding? I was having a blast. At a certain point when she spotted me laughing I told her, “You’re a little divine, aren’t you?” and she smiled back.

The pathologist finished her lesson and her IV drip and left, but came back later to swap the IV catheter to the other hand, so we got to hear more about her, her family, the fact that she was on ER call that evening…

By then, our Taxol was half-way through, and our chemo session was almost over.

I am reminded of W.H. Auden’s “Musee De Beaux Arts” and Pieter Bruegel’s painting “Fall of Icarus.” Each one of us stands alone in our personal hardships and pain, and life just continues for everyone else, no matter what. The challenge for me is to be able to zoom-out every once in a while, just enough to see the absurdity of it all, which is not always easy, of course. Today, though, I had some help. I had a divine intervention.

Liked that moment?
Subscribe to Maria and get their extensions as they publish them. 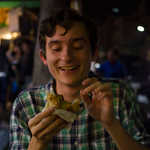 Shu, Steve, David Wade, Christine and 4 others said thanks.

Other moments in Athens