Scotty Lessons in a dry state

It was 37°C with scattered clouds. The breeze was light.

Last night was the best ever gig we all had in recent times. I was cock-tailed, Swami once again proved himself to be an evergreen host, Chakru Saab strategized for his next f**k, Jignesh captured everyone surreptitiously for his FB posts, Kakkar Saab played Mr Uncle to the perfection. Thakur showered choicest of profanities on mortal subjects who do not fall in line with his line of thought. And the kids were thinking when these as***les will fade away from the party scene!!!

Wondering what all these are? All characters here are not fictitious, by the way. They are real and they assembled for a normal routine party in a dry state. Not as dry as Sub Saharan desert.

Well, these thoughts occurred to me when I was driving back to home after partying with real characters who happens to be my best buddies along with their wives and kids at one of the swanky five-star Hotel in the city. Sometimes alcohol really helps re-energizes the creative soul inside you. But there is a flip side to it too, unless you are not meticulous to put everything down in writing the ideas, thoughts and exactness of expression fades away too fast. I have lost some of the best expressions of events and experience in nano seconds even before I could write.

So let me come back to my thoughts inside the car. These thoughts I exchanged with one of my friends recently after two and half years when they passed through my cranium on that enjoyable night. He was impressed with the kind of versatile company, people and experiences I had in the past and asked me to expand these thoughts further to make it good reading. At this moment I am not too sure it will really make a good read.

He was pestering me for a very long time to start writing my sojourn and travel exploits. We regularly exchanged our experiences and many a times travelled and enjoyed ‘good times’ together. I too had felt an urge in the past to put down ‘good times’ on paper on several occasions, but had lost my habit to write purposefully some eleven years ago.

Yes, it was eleven years ago I stopped writing as a journalist. Though, I kept on writing stories for news organizations occasionally, but never on a regular basis. Writing indeed is a great art and skill that requires consistency to keep it sharp and crisp. But I am making an honest effort.

Now back to that night of scotch binging at five star hotel. The city looked entirely different from seventh floor suite perch. Kids were on an eating binge too. They were the happiest and busiest lot to grab from an array of snacks, pastries, pizzas and burger. I was wondering whether it was a full meal or just snacks. Snacks were prepared for kids who loathe to eat proper meals, the attending staff informed.

For us the wait was killing. Vanities of a five star courtesy soon wore away. Now, everyone was eagerly looking towards Swami to initiate the binge ritual. Like a connoisseur of best scotch, he took out gold label from a finely crafted black goodies bag. Everybody had gleam in their eyes. Swami poured the scotch like ‘Amrut’ in flat bottomed glasses and then began his endless talk on the art of fine drinking. I was in no mood of listening to his unsolicited advice which he seldom follows himself. Swami always had this underlying greed to pour an extra ounce than others when asked to fix a drink.

After a couple of moments Thakur took the center stage and in no time fed everybody with oodles of cynicism and a twisted moral lesson in public life. Jignesh, a wife-inspired teetotaler started putting his smartphone to a better use to explore angles to frame journos friends having swigs of scotch as if it was a breaking news or scoop. I don’t know whether he published any of those photographs on social platforms to this day. Chakru chipped in at the opportune moment when everybody was bored of Thakur tongue lashings and colored vision of society. One after another Chakru laid bare his heart out about his old flames and escapes during stag days. Chakru pompously talked about how he two-timed his two female friends, who in turn were also close to each other. Both damsels were unaware about Chakru’s liaison with the other one. As always Thakur wanted ‘encounters’ to be more graphic and sleazy which Chakru readily obliged.

Liked that moment?
Subscribe to Sanjay and get their extensions as they publish them. 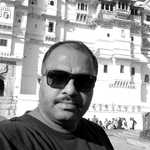 Binu and Shu said thanks.

Occassional drinker, occupationally dry. Day in and Day out makes me cry.