Today was a good day

There’s often a point at some dinner or party that makes me look back on the rest of that event and think, “Yeah, this is a good night.”

One recent example was at a ‘chocolate buffet dinner’ (which is exactly as it says on the label: a buffet dinner where the all the options were chocolate). Our group was still waiting to be seated, and nearby in this waiting area was a chocolate fountain surrounded by bowls of small cuts of fruit; wooden skewers beside them to entice you to link your favourite fruits and place them underneath the falls of the chocolate fountain, letting the smooth liquid chocolate caress and envelope the fruit.

I was seated with my back to the chocolate fountain, but as I heard their laughs I turned my head, looking over my shoulder at, what seemed to me, at that exact point in time, the happiest group of people in the world.

I couldn’t help but smile and think, “this is going to be a good night.”

Tonight’s moment that suddenly made today a good day was at dinner. When our dessert to share arrived, she pulled out a candle and lighter, stuck the candle into the tiramisu, lit it, and wished me happy birthday.

(Yes, I’m being intentionally vague on the identity of the other person because I don’t know if they appreciate me blogging about them! Note to self: ask her about that.)

So yeah, today is my birthday. I’m not the kind of person to go out and celebrate it - though there’s no shortage of people in my life who would love to have some kind of party around it - and the more people ask me if I plan to do anything around it, the more I retreat into my introverted ways and try to have the day, and myself, slip-by unnoticed.

Despite my attitude towards my own birthday, if I get an idea in my head for a special way to wish someone else happy birthday, I can go all-out on the execution. But sometimes there’s just not enough time to do anything spectacular, as was the case with my dinner buddy who, early last year, invited me to her birthday dinner the night before her birthday dinner.

We didn’t know each other that well then - we had plenty of friends in common, but hardly shared any words with each other. All I knew was that her birthday was the next day, and most of the people she really wanted to be there couldn’t make it. Like me, she didn’t want to make a big fuss of her birthday, so didn’t make a point of telling people that the dinner was for her birthday. That strategy unfortunately meant that her dinner had only 2 other people coming, 1 of which was myself - and I was on her B list!

It was her 25th birthday too, which many people in this country make some kind of fuss over - the quarter-century or mid-mid-life crisis - so I had to do something, but with less than 16 waking hours until dinner, there wasn’t really a lot I could do to try make this birthday stand out for her. The least I could do was turn up. So, when asked if I could come along, I replied, “Yeah, I’ll be there.”

T-minus 2 hours until her birthday dinner, I was at the grocery, on my way to the checkout, when I passed the small wall display that had all sorts of candles hanging from it: large packets of candles, some spelling-out ‘Happy Birthday’, others which had numbers on them to spell out an age, and so on. Inspiration struck. Most of it seemed a bit much for someone I didn’t really know, but I still wanted to do something, so I added a small pack of candles and a cigarette lighter to my grocery basket.

At dinner, when our desserts arrived, I pulled out a candle and lighter, stuck the candle in her pavlova, lit it, and wished her happy birthday.

I didn’t really think it’d have much of an impact - this small gesture, coming from an almost-stranger - but it wasn’t until many months later when I learned that, what I did on her 25th birthday, really struck a chord with her.

We started going out to dinner on a semi-regular/monthly basis sometime later, and when my birthday came around she recounted to me what I did on her birthday, and what it meant to her. She then pulled out a candle and lighter, stuck the candle in my ice cream, lit it, and wished me happy birthday.

That was last year, so yes, she did it again this year. When she did that tonight, it brought back to me everything that led up to this point: when we met, that first birthday dinner, and all the other events between then and now where we’ve developed this niche in each other’s lives.

So yes, today was a good day. And so were the last 1-and-a-half years. 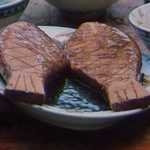 Mariah, Joy, Adrian, Allan and 2 others said thanks.