The Hierarchy of Clean Clothes

New York is a city of hierarchies. It’s not enough to have a comfortable home that shelters you from the elements, that’s safe and that can hold all your stuff. New Yorkers also give considerable thought to the ranking of boroughs and then the neighborhoods inside those boroughs.

There’s also a hierarchy of laundry. Some people have washers and dryers in their apartments. Some share with others in their buildings. Still others need to use public machines at a laundromat. I once lived on the 4th floor of a 5-story walk-up and needed to haul my laundry down the stairs and two blocks to just have clean clothes for the week. (If there was ever a time to be single that was not it.)

Now I live in a building with a laundry room just one floor up. One day I might move up in the world and have an in-apartment unit. Maybe not. Or perhaps I’ll become one of those I’ve forgotten to mention, outliers in the usual system of classification who for one reason (or another) don’t think much about the washing of their clothes at all.

Liked that moment?
Subscribe to Danielle and get their extensions as they publish them. 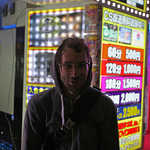