I have no preconceived idea of Milan, except for some B&W industrial images by Gabriele Basilico.

And a flickr contact’s photos of the characters on his daily commute. Someone has told me Milan is sexy. A google image search throws too many too bright high dynamic range images of the Duomo di Milan. The consequence of my unorganized approach to the city is that I spend most of the first day wandering in the August heat and not making much headway either on the major tourist sites, or on my sought imaginary industrial landscape populated by fashionable people.

I do start to get oriented and to have a sense of place, by streetcar and on foot. Hungry and thirsty, I stop at a small pizza joint in a rough seeming area; I think a hydrating cola and slice of pizza for 5€, if not healthy, is at least a reasonable deal. A whole pizza arrives. I’ve used priceline to book a hotel, which the site says is 4 stars. Its 1.8km from a train station and in a declining area. The saving grace is an effusive desk clerk and a endlessly formally polite waiter. I warm to the place and it’s 30min tram ride from central Milan.

There seem a disproportionate number of beautiful Italian woman and men.

I figure the city maps to concentric circles, after my initial scout. The centre around the remarkable white marble Duomo di Milan is touristic and dense with expensive but tasteful shops. The secondary ring includes parks, alcove vending machines, and low rise buildings, none seemingly newer than the last decade. And many architecturally fine office and apartment blocks. I feel I am on a film set. The third ring, which I have so far just glanced, is industrial and suburban.

I enjoy waiting, futilely since I’ve foolishly not brought my passport, for the shared bicycle system token and the free ‘Commune di Milan’ wifi pass. The long queue at an information office, the seemingly erratic closing times - I suspect would be tedious; but for now they are a view into the city. I imagine a socialist city state, in the best sense of taking care of the citizenry. But I don’t know how the economic crisis has worn the country, and how viable my utopian projection is.

Near the Nivigli Canal I find a bar and enjoy aperitivos’ and a Cuban beer. There are low slung outdoor cushioned benches. People come and go in couples and pairs. I keep trying to place why it seems so fashionable here; to be sure there is wealth, especially in the central zone. But there is also just a sense of relaxed style. Path dependence seems to mean an elevated sense of dress. Men wear jackets. 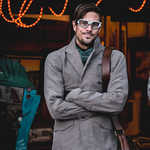 Lots of travel, still trying to capture the moments with photos, every so often inspired to take the roughly written notes and put them on air.

Other moments in Milan