Around The House, Home Improvement, Friends With Hammers, Prose

She continues gluing an anchor piece onto the crest of a wave.

Unlike the most of the people I know in New York, these friends of mine own their apartment. There are multiple bike racks spaced evenly, one over the other. There is a tank of carbon dioxide in the kitchen. For seltzer, he says, pouring me a glass. This afternoon we are working on what will be the backsplash behind the oven and kitchen countertops. Leave a few millimeters at the edges, she says, adjusting corner placements. I have experience with mosaics.

His mom is a potter in Vermont. Hers poured homemade jam into dozens of little jars for their San Francisco wedding favors years ago. He works for better bike regulations in the city. She’s an anarchist coder. This is what she decided on instead of a birthday party.

“Are you dating?” she asks archly, reaching for one of the ceramic shards near where our territories meet.

I look across the table. “Did the glue get you high?”

Her partner smiles beatifically and goes to the kitchen to eat a third Guyanese cod cake from the place down the street. The other anarchist coder, a nice guy with glasses who laughs at all my jokes, brought those and the cheese rolls and the smells are kind of taking me back to four years ago when these were my neighborhood streets. We snark hard on politics for a few minutes, switch to pie fillings, then settle back into companionable silence. The CDs shuffle in the machine. She stands and breaks some pieces down further, muffling her hammer with a paper bag.

They will grout it tomorrow and begin the next project, as you do in a couple that owns a place. You make choices. You go all in. You decide that what is real is better than some imagined perfect. That perfect doesn’t exist and if it does you don’t want it anyway. That when you paint the bedroom the color you compromised on and it looks awful and you both hate it you will go to the hardware store drunk and buy new paint and not talk until it dries, then decide this is your favorite paint color ever. You will open a window. You will hold each other when shit breaks. You will break shit together. You will secure the mosaic backsplash to the kitchen wall through holes you left room for when you laid out the pattern, thinking that someday you would pry the nails back out and lift off the mosaic and sell the apartment and know you made choices. Like a boss. 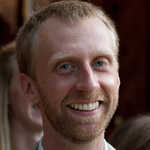 Paul, Andrew, Allan, Cassie and 3 others said thanks.