DC is perhaps my least favorite place in the US.

The last time I was in Washington DC, I ended up insulting a politically conservative talking head right before he went on TV.

I’m not political. I wasn’t judging him for his viewpoints on Red or Blue, and I didn’t have any expectations for the conversation (I had no idea how he voted, or why, or what party was propping him up as a demagogue). It wasn’t important. I was just sitting in the green room, waiting for a couple of friends who were being interviewed to finish their followup with the host.

But at some point this jabbermouth seemed to take my polite nodding and vague smile as an invitation to really unload, and he told me about some pro-school-voucher power play that involved using a school full of kids as props, diverting their buses and using them as an implied ‘stand in’ crowd to distract attention from a political opponent.

I couldn’t hold back a response. “Well that’s kind of a douchebag move, isn’t it.” I didn’t phrase it as a question.

I realized I was being pulled into something.

I said, “To each their own.” Shrugged, stood up, and left the room, retreating to the bathroom before I got pulled into a pointless debate with someone who I didn’t respect enough to listen to, and who I would never be able to convince of anything because ‘politics’ these days are not malleable — they’re a letter jacket.

I shouldn’t say that I dislike DC as a city, because there’s nothing inherently wrong with it, if you manage to dodge all the politicians, cronies, lobbyists, and ‘my team is better than your team’-enthusiasts. It’s fairly clean and beautiful. There are myriad Rome-referencing monuments, if you’re into that kind of thing.

But the people; the rank, desperate smell of unhindered ambition and pathological corpse-climbing is just more than I can take on a sensory and intellectual level. Give me small town America. Give me a big city anywhere that has an export other than politics. Give me any place that isn’t primarily populated by professional middlemen.

I’ll take any of those, any day, over a city full of pretty statues and flag-pin-wearing sociopaths. 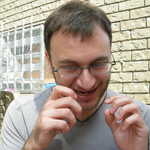 Samantha, Cassie, Paul, David Wade and 2 others said thanks.

Other moments in Washington