Rituals on the beach

They reach the beach logs and place their things on it. He gives her a folded page, a glass pen and purple ink. She begins to write and he moves into the trees in search of a token.

He tangles together ceder and ferns bound with blue grass and sea shells.

She calls out ’marco!’ as he walks back

Kneeling on the red banner next to her, he pulls his gift out and presents the bouquet with a grin.

She gives him a single wildflower, a white bell. Picks out a stone and the sliver of shell.

One is for now, to be used and discarded.

One is a memory, for myself she says.

The last is a reminder, small and pocketable.

He tells her nothing of his gift, and begins to draw with purple lines the night magic that has moved him here.

They offer the shore a single candle each, currents stirring the shy flames.

His Letter to the dead gods.

Water pushes sand up at them, slow steel made liquid ocean.

Standing, he takes his inked page- its body marked with something meaningless, beautiful- pulls off his shirt and pants, takes the red banner and ties it around his stark hip bones. Not looking at her, he steps into the water, candle and paper in either hand. When the sea water laps his kneecaps, he burns the page. As it alights in his hand, he walks further out to a stone and places both tools on it to watch.

Her promise to the blood in her body

Coming back to shore, he gathers her in his arms and carries her out to the rock, the water chilling his ribs and back. With a whisper- eyes closed- she burns her written words and lets the water douse its ash husk.

Night reaches into his heart and he aches to watch the water tell its incessant, mystery story. She asks to leave and breaks his fugue.

Before leaving he pauses a moment longer, wishing he believed in any prayer he could say to the spirit that had taken a warm home in his body——————

Liked that moment?
Subscribe to Jo and get their extensions as they publish them. 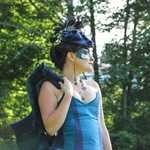 Peter, Charlie and Sarah said thanks.

Other moments in Port Hadlock-Irondale