I am so grateful for my hands.

I realize that’s an odd thing to say. But I type with them, I paint with them, I chop and mash and sort and fold with them. I do so much WORK with them. And as I sit here, reflecting on the four canvases in my studio, all at varying degrees of Not There Yet, all I can really think about are these hands.

I used to be embarrassed by them. When a friend of mine was looking for a hand model for some product photography, I volunteered to help. He asked me if I had nice hands.

“Nice hands?” I wondered. And began to panic.

I walked to his desk. Tryouts, I thought.

“Let me see your hands.”

I held them up.

He laughed at my hands. And he said something not very nice about them. And I never forgot it.

Years later, when I was at the startup Mailbox, we were making a video about our app. And we needed a hand model.

“Elle, you should do it,” said one of the engineers.

(I could hear All of The Internet laughing at my sausage fingers.)

I recommended that we find Professional Talent for such an important marketing piece.

The team laughed. And I was cast on the spot. (Without anyone even looking at my hands.) I convinced myself that this was just a prototype. The video would never actually be The One. So it didn’t matter if my hands were in it.

(On my lunch break I quietly gave myself a manicure under the table using nail polish from CVS and clippers from the First Aid Kit next to the Sour Cream and Onion Pringles. And then I printed off screenshots from Apple’s iPhone videos and tucked them into my purse for Proper iPhone Holding Reference.)

We shot the video.

The light was perfect.

The edit was just what we needed.

And I could hear The Internet laughing somewhere in the distance at my hands that grew up on a rope swing in the backyard (every day, for hours, for years) and in dirt scooping up bugs and around my pogo stick that I used for long distance transportation and on the ballet bar, covered in chalk and giving me calluses.

We launched the video.

I’m not sure what “going viral” means exactly, technically, but I feel like we probably achieved that. Millions of views. And lots of comments. Not one about my hands. Well, there was that One Comment where they called the actor a “he.” But… Well… There was only one of those.

They’re not long and lyrical. They’re not soft like flowers. They’re not your average ring or bracelet size at the store. But they’re industrious and strong. They know how to work. They open tough jars and and give long massages, tirelessly. They love to paint. They love holding hands. They love to reach those extra inches in each stroke at the pool. And they are always happiest when they’re covered in paint.

Yes, yes. I am grateful for my hands.

Liked that moment?
Subscribe to Elle and get their extensions as they publish them. 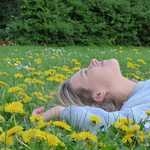 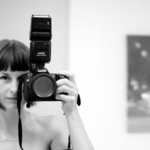 Shu, Emma, Chris, Cassie and 6 others said thanks.