No Lifesavers at this Beach

Snakes always create a bit of excitement in Australia. The one pictured above, likely a Lowlands Copperhead, is poisonous enough to be a little scary. We have many venomous snakes, and Australian Geographic lists this one (no relation to the North American Copperhead) as the 7th most dangerous on the continent. “Its venom is neurotoxic (damaging nerves), ruptures the blood cells and damages the cells and muscles - but rarely causes fatalities.”

The white sand at the bottom of the image marks the edge of a narrow track that leads down to Squeaky Beach at Wilson’s Promontory National Park. Just as I arrived, a gaggle of nearly naked teenagers reached the danger point coming the other way. As we all spied the snake, a pall of silence and indecision instantly fell over the group. Several looked questioningly at me, so I offered with a weak smile: “its bite is not usually fatal.” “Whatever” said the first young man bravely clutching his boogie board. Gales of laughter gave them all the courage to walk quickly past. Having braved the undertow sans lifeguard, they were up for any challenge. The snake, stretching out in the delicious warmth of the sun, took no notice. 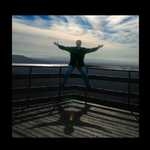 John, Peter, Adrian, Lloyd and 3 others said thanks.

Other moments in Tidal River