Bulleit on the rocks

A likely scene, voices in a bar on Grand Street in Williamsburg on a Friday night. The ceiling is made of bowling alley and one of the voices is mine, and earlier I was reading Meditations in an Emergency so Frank O’Hara’s been making phone calls in my head.

Two of the other voices belong to meditation buddies, S. and D.B., who brings his girlfriend whose first, only unstolen drink is a pickleback shot. S. I met two weeks ago and she teaches yoga and is a dancer and without her glasses reminds me of a girl I hung out with during summer orientation in Ann Arbor pre freshman year. That week Orientation Girl was hanging out with another guy, too, whom I knew somewhat and went to the rival high school in my same town. One night the three of us were in line together for the soda—sorry, pop—fountain in the cafeteria in South Quad, me in front, her behind me, and him behind her. I handed her a glass, she said thanks, he made fun of the way she said thanks, they are now married and live in Des Moines, Iowa and have a newborn daughter named Stella.

Two drinks in S.’s friends start coming and we annex square tables as strangers start going, growing our rectangular empire. Across from us a guy and girl are necking and their friend, she’s third wheel but doesn’t seem to mind. Roommates, probably. In the windows one floor up across the street hang four backpacks, one in each window. Students’ backpacks, we muse. Someone’s teaching a class. Not this late on a Friday night. To keep people from jumping out. That doesn’t make sense. Flashlights, rations, disaster survival kits. Most likely explanation. In the bags are each roommate’s most valuable possessions, and in case there’s a fire they can just grab and run. That has to be it. We should go find out. We stay seated and drink instead.

so I quickly threw a few tangerines into my overnight bag

I had a dream once that a branch of the tree outside of my window was calmly on fire and I could feel but not see smoke from the apartment a floor above. The two things I grabbed were my laptop and charger and I woke up thinking, Why the hell did I grab my charger!

D.B.’s girlfriend steps out for air and to call her mother and we talk about Mexican mystics and Dharamsala and wind up, as D.B. and I usually do, on affairs of the heart. He tells a story of a midwest friend who on a trip meets a Canadian girl and declares he’ll meet her in Montreal. Gets back home and posts a Facebook update asking if anyone is heading up to Canada, and a friend is taking his soccer team up there. The soccer team is playing against Canadian Girl’s team. He gets a spot as manager. Five years later they’re engaged.

I offer a story to our slab of Rectangularia: Two friends, M. and N., meet on the internet, have their first date in Costa Rica, marry within a year. After the wedding party M. posts a picture to Facebook of their first dance, and writes that it’s the first time they’ve ever danced together, and my reaction is, How could you marry someone without knowing how they dance? Then I realize that’s exactly how. Love is radicalest acceptance, an agreement to fall together into the unknown and possibly likely probably unpleasant, like at the end of Eternal Sunshine when Joel and Clem see all the fights they’ve had and will have unreeled in front of them and he says okay and she says okay and they’re both like, okay. Love is not needing to know how the other person dances.

“You didn’t just say that,” S. looks back and forth between D.B. and me. “You guys are so adorable.”

That’s an incredible story, D.B. says. Yeah, that’s exactly what’s wrong with it, I say. The only things that grow sharper when I drink are my own opinions. That’s the problem with all these stories, I say. You get them in your head and start trying to force them but it doesn’t work that way. You have to give them up, first fall into the unknown yourself before you can really be ready to do it with someone else and this last part I don’t say, only comes to me during the next morning’s swiss cheese hangover. S. nods. She’s moving to Beacon next weekend and she’s been looking to buy a used car, and went on dates with a guy who happened to be selling a used car. She wanted a hatchback. He had a hatchback. With a certain number of miles. It had that many miles. At a certain price. It was that price. And the car, she says, was parked around the corner from her apartment. Before buying it from him she took it to a mechanic to get it checked and there was too much rust underneath. It didn’t work out, she says of both date and car. There’s always too much rust underneath.

S.’s friends from out of town appear and so do more drinks. Third Ward went bankrupt last month. What. It turned into a logistical phone call. One trick is to keep looking at your hands. It killed me but I needed to die. A friend’s girlfriend used to date Louis C.K. and that bit he did on Conan about the cellphones came directly from one of their conversations. A friend of a friend babysits for Louis C.K. and she says he’s no different in real life than on screen. The trouble with vegan cheese is it doesn’t melt.

D.B. and girlfriend exit but not before asking if I’ll be okay and offering no small flattery: You are a handsome man in Williamsburg on a Friday night, you’ll be fine.

It’s more important to affirm the lease sincere; the clouds get enough attention as it is

S. and I get more drinks at the bar. When she was young her father (or was it her uncle? bourbon bourbon) used to pour whiskey in her ear to numb her earaches. It really works.

We sit back down. We talk with her friend about yoga instructors who drink and smoke and feel like hypocrites. We conclude that good teachers are forthright about their own struggles, don’t pretend that they know better. Teachings are transmitted, but no one is put on a pedestal. The gist of every biography about every great person is And They Were Human After All. Party of three across the way gets up to dance. S.’s best friend Alyssa does too. Jackson Five’s “I Want You Back” comes on. That’s my karaoke song, I say. You know what it’s about, right? Taking someone for granted? It’s about that, but also overlooking the ugly girl. What. “Those pretty faces always made you stand out in a crowd” is really mean if you think about it. You just ruined my karaoke song. We don’t go drinking that often. We have to get up early in the morning. We’re getting old.

Someone gets me another bourbon. There are votives on the seatback against the wall and my hair almost gets caught on fire. Who puts fire at hair-level? S. gets up to dance with Alyssa. Rectangularia has collapsed and the only of us seated are me and Alyssa’s husband, Andrew. The three of them grew up in the same town, have known each other since middle school.

I never thought we’d end up together, Andrew says. She’s the kind of girl who makes out with everyone and I’m the kind of guy who falls in love with anyone who kisses him.

They started hanging out after college. She’d come over and buy weed from him and they’d smoke together. A year later they were married. She was pregnant, he says. He proposed to her three times. They had two weddings. The first time he went over to her father’s to ask for her late step-mother’s ring. (Dossier on the father: Hardened oblivious Italian man. Wife passed away, remarried, new wife passed away, all within a year and a half.) The father gives Andrew the ring then leads him to the stairwell and starts yelling for his daughter. Come down, Andrew’s going to ask you to marry him! (that sentiment but not those words, bourbon bourbon bourbon). She comes to the stairs, he gets on one knee, she starts crying.

The second time, a perfectly romantic day together. They end up at a restaurant. Her (sentiment): You’re not going to propose to me in a restaurant, are you? He has the ring in his pocket. She starts crying.

Third time it happens. They get married, quick. There is a miscarriage. They take their time, have a real wedding. We watch the women dance in our inverted bowling alley and the place is going up in flames soon so I’m going to take my bag and run.

I think it has an orange bed in it, more than the ear can hold.

S. and I walk out together. She lives in Greenpoint. We go up Manhattan Avenue to Jackson Street, my turn. We hug for a little too long, bourbon bourbon bourbon stop. I’m walking away, she’s walking away, we’re shouting at each other from across the street something about Tuesday and dharma and Send me a Facebook message. I turn my head straight ahead and fall into the night.

I am the least difficult of men. All I want is boundless love. 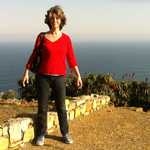