Your one real goal as a writer: to keep your butt in that chair.

I’m doing NaNoWriMo again this year. For those of you unfamiliar with the weird acronym, that’s short for National Novel Writing Month, where a bunch of insane people all across the world write a 50,000-word novel in 30 days, preferably with no plot and little preparation beforehand. Except for telling your friends and relatives that you’ll be inaccessible for the rest of the month trying to make your word count — around 1,667 per day.

I “won” NaNoWriMo a couple of years ago, and a bit of that first draft, polished and gussied up a little more, got me into a pretty prestigious writing workshop. But that was about two years ago, and I haven’t really written since. Not even just to play around with words.

I thought I’d throw out the NaNoWriMo rules and make some arbitrary ones. The challenge I came up with was to write a short piece — flash fiction, prose poem, the difference is splitting hairs, really — of less than a thousand words (I think I’m averaging 500) based on a song title. Maybe once a day.

The fun part was choosing an album, as I had to write the pieces in order. (This constraint, I hoped, would actually free me up to play around even more, as I didn’t have to follow a fairly strict narrative.) Steely Dan had great song titles, and so did The Clash, although how I’d write a piece called “White Man in Hammersmith Palais” was beyond me. (That criterion was also how I nixed The Smiths, who have fantastic titles — “William, It Was Really Nothing” already sounds like a Raymond Carver short story — but I think I’d be stuck in a particular mood all the time.)

I ended up choosing Pavement’s “Slanted and Enchanted” and “Crooked Rain, Crooked Rain.” Their titles are willfully obscure; I don’t think even the band members know exactly what their song titles mean, but that’s part of the fun.

I started with Song #1, “Summer Babe (Winter Version)” (http://www.thewilyfilipino.com/blog/2013/11/01/summer-babe-winter-version-nanowrimo-exercise/), Song #2 has already been posted, and I’ve hammered out a first draft — perhaps the only draft — of Song #3. Guess that means I’m ahead.

And so I have to remind myself: the only real goal is to keep that butt in the chair. And write.

Liked that moment?
Subscribe to Sunny and get their extensions as they publish them. 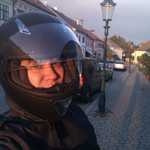 David Wade, Cassie, Anne Marie, Ndrs and 4 others said thanks.

Other moments in Alameda