The man stands motionless in a crush of white-shirted salarymen, as they swarm past him, toward the single escalator.

It was 15°C with few clouds. The breeze was light.

As I walk toward him, he turns and makes eye contact, then blinks furiously and faces the tracks. The crowd parts for a second and I am able to see him in profile. On top of his shaved head rests a thirty-centimetre-tall plush mushroom with a grinning anime face. It is bright pink, with lurid purple spots, and is attached by means of a crude elastic band that runs beneath his chin. Below the hem of his robe are a pair of yellow crocs.

The neon canyons of the inner ring pulse and reflect the asphalt patchwork, newly wet, attended by countless men in blue overalls and yellow hats. The hyper-colour chameleon sheen of Tokyo in the wet. This city that stretches into the future. Not a future of now, but instead one imagined in the 1970s and now detailed with the patina of age. Avocado phones gone mouldy with the passing of time. The shuttered shotengai and their Blade Runner neon. The death rattle of pachinko.

The storm drains are built on a scale unimaginable to me. Giant engineering to funnel the torrents of post typhoon run-off off the streets and into immense subterranean rivers. In the space of a few hours, the drainage ditches transform from bare concrete to raging torrents. The forces of nature that inform so much of the civil engineering here. Earthquake-proof skyscrapers swaying gently in the wind, a forest of concrete and steel. And red triangles on every building, windows marked so the fire-fighters know where to get in.

The metro map is the same. The spaghetti tracks of colours and lines as they were ten years ago. Next to it, a vending machine filled with the same products for the same price. This is economic time travel, a world without appreciation. One where amid the flurry of seasonal produce and limited-time offers, the same brands still bear the same logos and the same smiling celebrities, albeit with a few more airbrushed wrinkles and new slogans. “When?” “Now, of course.”

The station jingles are still the same. As I stand in Shinagawa station and hear the first notes of what I can only identify as the Eels Last Stop This Town, I’m reminded that so much of travel, so much of the nature of these moves across the oceans are determined by the human capital of those that surround you. Because cities don’t change. Behind the privacy-screened-scaffolding of endless construction lies the same country. The same city. The same Tokyo.

But Tokyo is a city which hides its secrets well. Last week, I walked alongside a tall concrete wall in that style that Japanese suburbia does so well. White, lightly stuccoed and absolutely unremarkable were it not for the beautiful brass plaque a few inches from the ground. Pitted, worn, and framed by moss, it was covered in tiny precisely-lettered but well-worn characters that I could not read save for two, “nature.”

I followed the wall up the hill and around the block where it opened onto a break in the wall with a small gate house attached. This is the Institute for Nature Study, established in the post-war years to provide a living catalogue to Japan’s flora in central Tokyo. It is understated and enormous. The moment of transition as you push through the door and move from the busy streets into that corridor of green is startling. The feeling of unbelonging and unease tempered with awe and beauty. It is about as concrete a metaphor for the duality that is so often at play here as I can imagine.

The train pulls up to the platform and disgorges a new load of half-sleeved cool biz clones. The monk -I use the word simply because that is what that robe, those colours, makes my brain scream- steps lightly aboard and the doors slide shut. I get one last glimpse of the mushroom as the train sweeps away, a splash of colour amid a sea of monochrome.

People stare as I heft my backpack and step onto the train on the opposite platform. I guess I must stand out. The doors close. The station jingle sounds. My coffee was 110 yen. 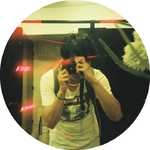 Emanuel, Christine, Ricardo, Thomas and 6 others said thanks.

Never had a day a snow cone couldn't fix.