The lily thief, the woman in winter clothes, the casual backyard invader.

Yesterday, after picking me up from the bus terminal my mom reported, angrily, that someone had stolen her Oriental Lilies. She clarified, “Actually, they took the bulb. They left the flowers and the petals everywhere.”

“They stole your lilies?” I was confused. The lilies were planted on her front lawn, in plain sight and so fragrant you could smell them a few houses away but it seemed improbable that someone would actually take them. This was, after all, boring but predictably safe Mississauga.

“They took them!” My mom repeated, emphatically. “There was a trail of dirt going from our driveway to the sidewalk. They dug them up and took the bulb and then dumped the flowers on our neighbors’ lawn.”

When we pulled up the lilies were, sure enough, gone. I felt sad: I had begun to associate their ethereal scent with coming home.

“Maybe that crazy lady took them,” I suggested, referring to a woman who had recently become a recognizable part of the neighborhood. She was middle aged and immediately notable for wearing a tightly belted trench coat and toque despite the summer heat. She also had a habit of wandering around, her face scrunched up in a paroxysm of confusion, her arms jutting out from her sides so that she vaguely resembled a penguin, shuffling about, searching for winter.

“No, whoever took them knew what they were doing. She doesn’t look like a flower thief. The thief took just the bulb, not the flowers. They are going to plant it.” My mom parked and drew my attention to the white petals strewn on the driveway. “Look at this,” She said, with disgust, “And this.” She picked up a ripped petal and examined it. “I saved the flowers though,” She said.

Later that night, over a dinner accompanied by the scent of the rescued lilies, I learned of another interesting development which seemed antithetical to the usual pace of life in Mississauga. A young man in his late teens had started appearing in our neighbors’ backyard at odd hours. They had seen him hopping the fence and then dashing through their front yard multiple times. When they were finally able to confront him he gave an inarticulate, jumbled response about it being faster.

“Faster than taking the sidewalk?” I asked my brother who was relating the story as he had been visiting my parents when the young man was caught.

“That’s what he said, but the guy didn’t make any sense. He also didn’t seem to care.”

Apparently, after the young man was caught and confronted by our neighbors he did it again, that same day, late at night. Other neighbors down the street reported seeing him in their backyards as well.

Interesting, I thought, interpreting all these incidents as part of the rapidly changing face of Mississauga.

The downtown core, once entirely and solely centered around a poorly designed and rather unattractive mall now has several walkable stretches, some gardens and some semblance of culture. The mall itself, for better or worse (some say worse!) is becoming more upscale and the food court, once dinghy and limited in its options now has several exciting options including dim sum. By my estimation Mississauga is rapidly becoming less the sprawling, featureless city of my youth and more a city in its own right. It also appears to be attracting a more diverse array of people: lily thieves, unabashed backyard invaders and seasonally displaced people. 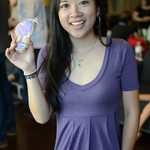 Linda, Vivien, Max, Anne Marie and 3 others said thanks.

Other moments in Mississauga