The Darkness You See

The first night I hung out with T we walked to the nearby plazoleta where they were holding a weeklong festival. There were red banners hung over the facade of the church, street carts with steamed corn and roasted guinea pig, live music, puddles of piss, drunk locals sitting on crates of liter-sized bottles of beer.

The thing you should know about T is that he’s perhaps the most intuitive person I have ever met. He’s a musician, also grew up in Michigan, and has been in Peru since November. Shortly after he got here T attended a two-week dieta—series of Ayahuasca ceremonies—in the Amazonian jungle. He’s has had several brushes with death, and the series of coincidences that led him from a tortuous path in a crumbling band to a first then second trip to Peru make it seem like larger forces are guiding him. Once when he was trekking in the forest, he got lost and asked the forest out loud to show him the way out. And as soon as he’d said it, an eagle tapped him on the back of the head then flew off, and he followed the bird to safety.

In his dieta T worked through a lifetime’s worth of issues, and had such a positive experience that the shaman gave him a bottle of Ayahuasca to take home. T found himself falling into the role of shaman, taking friends up to the caves in the mountains above Cusco to lead his own ceremonies. That night on the steps of the plaza he asked if I was interested. I said I was.

In the week leading up to the ceremony I was asked to eat mostly vegetarian and meditate on some of the areas of my life I wanted to explore. Yesterday, Sunday, we had light breakfasts and started out for the mountains at a little past noon. We first went hiking with a couple other friends, then scouted the cave where we would hold the ceremony. We could see storm clouds and occasional flashes of lightning miles away on both sides of us as we walked, though the skies directly above were moisture-free and often sunny. The other friends headed back toward the city three or four hours after we’d set out, leaving me and T with time to explore the caverns of Zona Equis, including one that T called the Temple of Doom, that narrowed as you went down a stone staircase, required you to crawl on your knees at one spot, and turned enough times that there was not even reflected light from outside. We dissolved in the darkness as T played his mouth harp.

Toward dusk we made our way back to the scouted cave. T set up on three flat stones between us the other things he’d brought for the ceremony: kalimba, portable didgeridoo, bundle of dried eucalyptus leaves, measuring cup, Palo Santo incense, crystals. He blessed the area with Mapacho smoke, and we sat and waited for the light to go.

Four hours and centuries later, we emerge from the cave. It’d been raining for a while by then, mud all over. Shoes, socks, pants, jackets, hair, everything: beyond soaked. I slip a few times on the wet grass, and my saving grace is a rust-colored eucalyptus walking stick I found earlier in the day. We stand on top of mountains draped in white fog and stop at the nearby Moon Temple on the way back to give thanks in the altar for safe passage. We walk toward the orange fog, the light pollution of the city, and down along the waist-high stone wall—sometimes on top of it, though we’re not supposed to—demarcating the Inca Road which which stretches from Quito, Ecuador down into Argentina. Ages ago, I imagine, when the road was washed out from the rain, Incan journeymen must’ve walked on the same rough stone. And aeons before that, when the first barefoot primeval man picked up a branch and discovered he could use it to help him traverse the earth, he gave up a piece of himself to that stick.

We get back around midnight. Make tea. Talk about the things I saw, that I struggle to describe. Shower. Fall into bed. Dream that I’m still awake, pondering the scenes from the darkness of the cave. 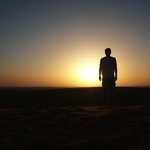 Mark, Griffin, David Wade, Craig and 4 others said thanks.

Other moments in Cusco