Random Reflections on Nothing From Nowhere:

I haven’t been eating enough. There is only one restaurant here and no grocery stores, so consumption is a highly public affair, over lots of gin and cupfuls of red, sour wine. Except D’s friend is exceedingly precise, indulging only in ginger tea and mango juices with no extra sugar. Apparently, he’s been sick.

On the other hand, D. is amiable with everybody, playing guitar with our host and reading books about nutrition while he architects a plan for Better Personhood. On top of that, he sleeps twelve hours a night at minimum, which leaves me blue with insomniatic envy. (In the wet, tropical heat, I’m awake every day just before dawn. In time to catch sight of these indelicate monkeys, indistinct and as evenly grayed as the light; never in time to feel rested.)

The communal area is a raised wooden deck papered with sandy, straw mats. Its bookshelves are composed mostly of German novels, which says a lot about who comes here. Right now, it’s us and two other couples. One with kids, one with a sense of humor still intact.

We had fresh barracuda for lunch, roasted to a puff, plattered with pineapple, chilis, and an excess of lemongrass. D.’s friend takes a single bite and his face disappears into a cavernous grin. He says nothing for the rest of the meal, just eats.

That night, played volleyball with our hosts and some passing German tourists who we had cajoled into competition with promises of free beer. Read books under meager, yellow light and drank wine until late, after that. During the day just swam, read, laid. Talked a lot with D. Tried to have thoughts about what I am doing here and where I am going. Failed. Instead, a cold finger of current caught my left ankle and I kicked further out to sea.

When on land, I’m reading a book that is excellent with details. “Why is he telling me that?” I find myself asking, constantly. But he’s given me an image, sharp and perfect, so that’s why, I guess. He knows that the details we don’t think about are more important than the ones that we do. It’s important to tell us that she rests her glasses atop of her head while she rummages for house keys dropped in the hedge, because the way she gets into the building is more important than the way the building looks or the name of the street. We’ve all looked down on people from above, before. 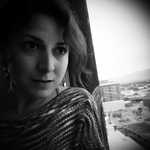 David Wade, Kristen, Paul, Emanuel and 10 others said thanks.

Other moments in Ko Siboya