I decided to share this personal story, because it may give food for thought to others, who share their lives with stubborn, argumentative, but totally adorable folk. Yes, if you recognize the above personal traits in your beloved sweetheart, this account is for you!

Our honeymoon period felt like an old VHS tape, fast-forwarded into the doom of mundane everyday banality. Well, to be fair, slow and uneventful days, were marked by fresh peaks of achievements, accomplished via collaborative efforts, like buying our first house together, or by unexpected bursts of energy on our part, like decorating the bathroom (it was a bit dated) or agreeing, for once, on whether to get a cat or a dog. By the way, we are still looking for the right puppy.

We live in Parramatta, a very trendy suburb in Sydney. I fell in love with our house from first sight, mainly because of the spectacular riverside view and the relatively private garden ,we got, and its huge potential. The Garden, which turned to be the main culprit of all troubles, the killjoy of our new life as a married couple…

Would many not agree? It all started as a gentle harmless plea. I’ll be having these dreams about my new garden, drawing up plans in my head about having a water feature, looking through specialized magazines for ideas and of course, searching the web for a reputable local company to hire. After all, there was some money left from my husband’s colleagues’ wedding gift that we could put to good use. Time went on and my soft reminding turned into an open nagging. The main issue was that my fellow felt that he was totally capable of digging a pond himself in our backyard and that he was hoping to buy a new push bike with his money. After all, he helped his brother fix his roof last summer, so surely he can dig a garden pond. He was going to do it for me, working hard on weekends, because he loved me so much.

The reverse psychology, I relied on as a last resort, made things far worse than I imagined. As I couldn’t convince him to hire professional gardeners, set locally in Parramatta, I adopted the good old ammunition of reverse psychology. Hoping that if I pretend that I was trusting his authority on DIY ventures (he did build a simple birdhouse for his niece once) and if I opt for actually reinforcing his autonomy in the matter by telling him “Well, it’s up to you what you wanna do!”, then maybe, just maybe, he would give in and change his mind. Yes, I was secretly reading expert opinions on how to deal with stubbornness in similar situations. To be honest, I was fuming on the inside. His money? I thought it was our money! I even turned to shady and devious techniques like organizing a barbecue one Sunday (so he couldn’t dig) and begging my mum to ask him to give her a lift to the center the following Sunday (so he couldn’t dig).

The consequences from alternating psychological tricks in disguise with open accusations of the sort: “You keep promising, but you simply can’t find the time! Let’s just hire a proper company!” only made the whole pond saga turn into a full blown not speaking to each other situation. To cut a long story short, nothing worked on my husband. He was stubborn as anything and his determination to win only contributed to the situation escalating out of control. My fellow followed closely the special video instructions, he found on the Internet. He bought all the materials and tools he was missing in his modest collection of gardening devices. For two weeks, he devoted most of his evenings after work to digging, tinkering in his shed, asking his mates for advice over the phone, changing constantly his ideas and plans until we ended up with a Moon-like landscape in our back yard. Random piles of unearthed mud (it was raining for a while), several craters, filled with brownish liquid, which was beginning to stink, tools, scattered around – you name it!

I could smell capitulation in the air, but there was no glee in my heart. I loved him too much. At the end, we did call some local gardening professionals, who did a fantastic job, and my husband and I reconciled alright.

I have to admit that after this incident, we are both trying to make more compromises for the sake of our relationship. We agreed to take it all as a learning curve and put the story behind, after I shared it with you!

Liked that moment?
Subscribe to Lana and get their extensions as they publish them. 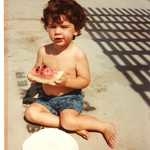 Galway and David Wade said thanks.

Other moments in Sydney