Ronny always waves. I’m not one of his people yet, but if I stay in Brooklyn long enough I will be. We both feel that. It’s also the best reason I know of not to move into Manhattan - Ronny famously won’t drive his delivery truck over the bridge.

And so his antique seltzer bottles of green and blue rattle around the borough in their loosely-tied wooden crates, sets of ten exchanged twice a month, payment in cash. You’re not to ask about the cream soda on the top of the truck. There is a system. You have to respect the system.

The first time I saw the truck I was out with an academic I used to date who loves food co-ops and collective action as much as I do. “It’s the Seltzer Guy!” I looked at him. “There are maybe six,” he explained, measuring my reaction to see if I was truly interested in Old Brooklyn lore, “but he’s the Seltzer Guy,” my practitioner of moral philosophy continued. Forty years on a route that isn’t written down. No advertising. You have to be introduced through someone already on the route (preferably a neighbor who can vouch for you and take delivery if you aren’t around), or you can try your luck and approach the truck directly. You will be added to the route only if Ronny thinks you can be trusted with the antique bottles. “Can you be trusted with antique bottles?” the curly-haired prof whispered in my ear as we walked by. “Can you?” I said out loud. We averted that particular existential crisis.

Seltzer is having a bit of a moment here in the U.S., with a popular consumer appliance that adds an adjustable amount of carbonation to tap water dominating kitchen countertops. Not so with Ronny’s bottles. You will enjoy 60 pounds of carbonation per square inch (psi) because that is the level the last seltzer factory in New York fills them at after the paddles have mixed the carbon dioxide and the water. For context, sparkling wines with corks that shoot up toward the ceiling are between 60-80 psi. The consumer carbonation device tops out at about a third of that pressure. Seltzer heads talk about the bracing impact of your first sip at anything higher than 30, (homemade kits with tanks of carbon dioxide are usually around 45 psi) - it should make you blink.

So much depends upon the structural integrity of your seltzer vessel. When you crack open a plastic bottle, the pszzzzz is all that beautiful pressure leaking out. In the glass antique, you tap the trigger, pour a little, and the pressure stays in the bottle. It’s a lot like Brooklyn and the Seltzer Guy, as far as I can tell. Prove you can be trusted, and somehow, it just works. 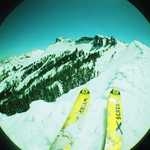 tobiah, Lia, Craig, Gabrielle and 15 others said thanks.