Situated on the corner of Herbrand Street and Guilford Street, this delightful doorstep sits outside number 61 Guilford Street. This building marks the start of a terrace of late 18th Century houses (built by James Burton between 1793 and 1799) and is now home to the Celtic Hotel.

The letters HH presumably indicate that this was, at the time the tiled step was created, most likely a hotel under a different name - perhaps the Herbrand Hotel?

This style of geometric tiling was all the rage in the latter half of the 19th Century, so presumably this example dates from that period. Regardless of its date though, the black-and-white design is certainly very striking. 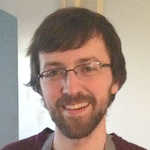