It was a kind of warm sticky. My mouth was dry in my were hands trembling.

It was 7°C with scattered clouds. The breeze was gentle.

It was hot. The kind of hot where your breath is stuck in your throat and it would feel better to not inhale but you do it anyways. My mouth was dry and my were hands trembling. The adrenaline was pumping through my veins, my skin was a pink color. My eyes searched my surroundings, trying to pick up on anything dangerous. The terrain consisted of large brown mountains covered in rocks of various sizes, and no vegetation in sight. The sun was blocked by vast gray clouds that were rolling with thunder. I recognized the terrain and suddenly I knew what was about to happen. A cold feeling swept through my body and through my fingers and toes until they were numb.

My heart beat so loud in my ears that I almost couldn’t hear him. “Stella.” A young voice murmured from somewhere behind me. I whipped my head around so that the pony tail I was wearing whipped me in the face and the loose hairs that stuck out sliced across the surface of my eye. Ryan. He was lying on the ground, curled up like a child. His once bleached blonde hair was covered in dirt and his clothes were ripped and torn in places so I could see most of his chest and some of his legs.

This was the third test.

The council had sent me through two other simulations, and would continue to do so until I was deemed fit for my new post.

They told us that every test would be different and unique, yet this one was one of my own memories. One that I had hidden away in the corner of my memory and tucked away.

I kept my eyes on Ryan and watched as he suddenly arched his back, a silent scream tearing at his throat, and rolled onto his back. Its like every nightmare I have about him. His body began shaking and convulsing. This time I can do something. This time I will do something. I was supposed to be protecting him. My little brother.

“Ryan, Look at me!” He doesn’t, and his eyes roll back into his hear and I am met with white. A scream tore out of his throat, too high pitched, inhuman. The terrain shifted a little bit. A small glitch, but it was enough. I suddenly remembered where I was. I sunk down to the ground, and concentrated on what the council made us say when we first had arrived at the compound. My name is Stella Novel. I am seventeen years old. No living family relations. I willed the lights to turn on and the simulation to stop. The sick feeling in my stomach was still there when the screaming stopped and bright lights tore though the darkness. But I stayed on the ground like a child.

Logic told me that the simulation only lasted a few minutes, but my body ached as though I was laying in that dessert for hours. I breathed in and out, again and again. The cold air and floor reminded me that I was safe. I was safe now, but Ryan wasn’t.

“Stella, come on. It’s over, you’re okay…we’re all okay.” I heard a pained voice. I opened my eyes and looked up, my safe position crumbling, just a little bit, to see a pair of bright blue eyes. Too bright, not at all normal.

He’s a member of my group who was being tested the same time as me. He probably finished his simulation a bit before mine. His black hair was messed up and his eyes were still wide. I closed my eyes again.

“Where is Ryan?” I managed to get out. “Calvin…” I mumble. My universe was still spinning, and I needed something to grasp onto.

“Stella we need to leave the simulation arena. It’s okay, come on.”

I knew he was right. I couldn’t show the Council any weakness, and they had the vast arena bugged. But when I didn’t get up or respond Calvin gently picked me up under my arms and stood me up. He managed to get me standing. Mostly still leaning on him.I leaned against him, and he helped me out of the arena. He stands me up against a wall and I use it as my support. Calvin looks up and down the long hallway, grey and concrete. Everything in this damned compound was concrete.

“Where is he? Where’s Ryan?” I strained myself trying to raise my voice. It came out as a harsh whisper.

He held my face between his hands and suddenly I was very aware of how close his face was to mine. I could feel his breath on my nose when and he looked at me in the eyes, I broke the eye contact. But his gentle hands kept my face pointing in his direction, so I settled on his lips. My universe was still spinning, but I decided to hold onto Calvin for now. He said the next part very slowly. “It was a simulation Stella. He’s gone. Ryan is not here. He’s gone.” Calvin repeated the last part a few times before it hit me like a slap.

I felt my cheeks redden and the tears brim. It all came back to me. The Grey Days, and the Great War, Ryan’s death, and the disappearance of my parents, the council. I turned on my heel and felt my knees buckle. He caught me, and I let him hold me.

“Wait Stella, not here. Come on.” He took a breath before he lifted me up like a baby, my head on his chest, and my legs dangling. “What I meant is that it was just a test. A simulation. All I wanted to do…” He stops walking when we got to the elevator, and my eyes met his.

“He’s gone Calvin.” The elevator doors open and he walks in. “I’m alone.” My voice shakes and the doors close.

Liked that moment?
Subscribe to L. mau and get their extensions as they publish them. 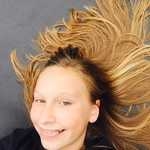 A. and Craig said thanks.