How did you get to be like you are?

It was -4°C with overcast. The breeze was light.

“Where did you get that part of your personality?”

“Which part of my personality?”

I was finally described in the same way I see myself. I’ve always considered myself strong and fiery, but I’ve never been described it because most people don’t see past my medical and physical problems. Though once people get to know me they realize that I’m not just my disability, I’m so much more. Now that someone finally sees me like I see myself I have confirmation that I really am what I think I am, strong, stubborn, fiery, & independent.

“I don’t know. Maybe my mom. I thought it just came from me.”

Either way, I’m smiling like I’ve never smiled before.

Liked that moment?
Subscribe to Mariah and get their extensions as they publish them. 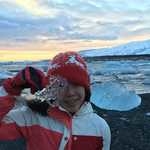 Victoria and Catherine said thanks.

History buff living with chronic health problems. Lives life to the fullest, and dreams the biggest dreams, despite not being able to breathe in her sleep.