In 1964, the Beatles took a world tour, and nowhere were they more rapturously received than in Australia - Melbourne, Adelaide, Sydney and Brisbane. 300,000 fans turned out on the streets of Adelaide alone! That was getting up to half the population of the city at the time. So, the Powerhouse (Sydney) and the Performing Arts (Melbourne) Museums decided to celebrate the Golden Jubilee of this grand event with an exhibition, which is where I spent an hour or so yesterday (Saturday) afternoon.

I don’t intend this sketch as a review of that show, though I should say it was competently assembled and looked like a lot of fun for those interested in the popular culture of the era. Rather, I wanted to tell you about a momentary wistfulness (should I call it that?) which passed over me as I stood staring at all the Beatlemania memorabilia, imagining the hundreds of thousands of fans, many almost hysterical, whose number had so dwindled that . . . well, click on the pic above, if you want to see what I mean. 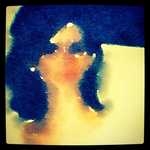 Christine, Lily, Paul, Philippe and 2 others said thanks.